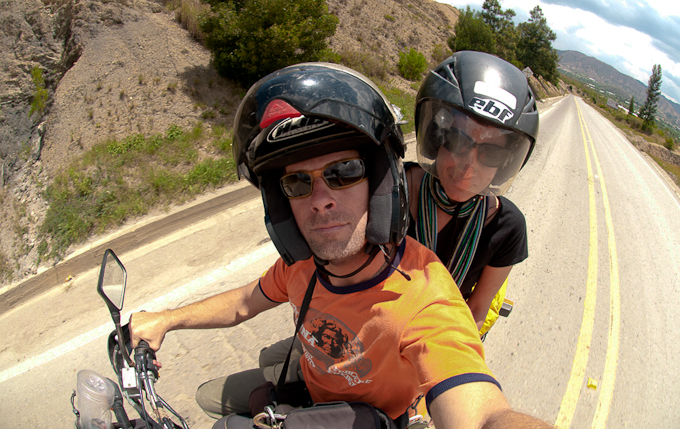 Travel in Colombia by Motorbike

Since I started this journey, I’ve done a few awesome things; one of the most amazing experiences by far was when I traveled around Colombia on the backseat of a motorbike. As the best adventures in life, it wasn’t planned; it just happened. I first met Alain Denis, an adventure photographer who traveled all over the Americas on his Suzuki DR 350, through CouchSurfing. We were both in Colombia at the time and arranged to meet in Suesca.

We got along pretty well and soon we decided to travel in Colombia on his bike. At first, I was a bit nervous because I’d seldom been on a bike before and felt that they weren’t very safe; not to mention the issue of crazy traffic in Colombia. However, Alain turned out to be a very good and experienced driver; after all, he had ridden his bike all the way from Canada to the end of the Patagonia.

For me, traveling by motorbike was a totally different experience. When you ride a bike, you are out there with the elements. There is nothing to shelter you from the scorching sun, the wind, or the rain. Oh, and let me tell you about the rain… During this time it was particularly rainy in Colombia, and there were numerous floods and landslides that required the closing of quite a few roads.

In fact, during our travels we found big traffic congestions quite a few times due to road closings. The biggest one we saw was when we were making our way to Barranquilla, and came upon a collapsed bridge on one of the major roads. There were huge lines of vehicles on each side waiting for their turn to pass, while motorcycles could just pass through. Another time, we came upon some cars waiting on the road; when we got to the head of the line and asked what was going on, someone explained cars couldn’t go through because they had just painted the lines on the road. They were literally watching the paint dry!

Sometimes getting caught in the rain was inevitable. In fact, one of the scariest experiences of my whole trip was when we were going to Bucaramanga and we had to drive through the bottom of an immense canyon during a heavy downpour. When we were about halfway through, a few rocks as big as human heads came flying across the road just in front of us. The blood in my veins froze and I screamed as Alain tried driving as fast as possible in the heavy rain to get us out of there quickly. Not fun, I tell you!

There was also that time when we went to El Peñol and we had to drive around looking for a place to stay. Eventually, we came upon the bridge on the photo bellow and decided to cross it while riding the bike despite its dodgy appearance. We had no clue if it would hold our weight, plus we were carrying our laptops and all our photography equipment. What a relief it was to get to the other side!

It was also a bit funny that Alain’s bike looked almost exactly the same as the bikes the police drives in Colombia. Anytime we passed by a police checkpoint they would always wave at us. The bike always attracted a lot of attention from guys in general, sometimes they would come up and just start a conversation with Alain and marvel about his travels.

Mechanics were also specially in awe when Alain would tell them about how many kilometers this bike had ran and some of the places he’d been to with it. During our travels together, we had to pay a few visits to mechanic shops; as the motorbike needed constant maintenance after being through so much and I became the official translator.

However, the funniest looks we got from people was when we traveled from Suesca to Barranquilla with a surfboard on the side of the motorbike. On top of that, we kind of got lost on the way thanks to Google maps; on the screen it appeared as if the road we chose to take was some kind of major road, but when we got there, it turned out it was just a dirt road in the middle of nowhere. For hours we rode that way, hoping there were no slides or anything that would make us turn back. There was no mobile signal and no one to be seen for kilometers on.

Finally, the adventure around Colombia came to an end. After months traveling together, we went our separate ways. Alain continued on his mission up north and crossed on to Panama by boat, for a few days journey through the San Blas islands. Meeting him and traveling together was a truly life changing experience for me and it gave me some inspiration for what I wanted to do with my own personal journey. Thanks Alain!