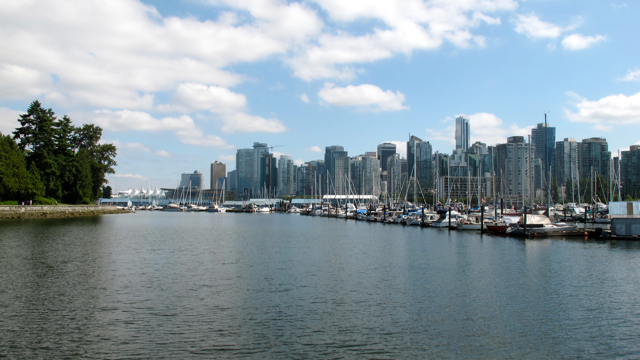 Vancouver – Rushing To Get Out Of The City

Arriving to Vancouver International Airport was a big relief after traveling for almost a whole day and spending 10 hours of layover in San Francisco. The airport is Canada‘s second busiest, following Toronto‘s. It’s also considered one of North America’s best airports, according to Skytrax. The airport is located only 12 Km away from downtown Vancouver. We were lucky to have one of Alain’s friends picking us up and give us a ride north to Squamish, which is another 70 km away from the city.

Even though we spent most of our time in Squamish, we went back to Vancouver a few times. During our first visit, we stayed in North Vancouver while we searched for a van to buy for our Canadian adventures. It took us a few days of intense searching. But we finally found the one that was right for us, a rust-free Toyota Previa. We rushed to pick it up in the nearby city of Surrey and bought it on the spot. We named it “Silver Rocket”.

The second time I ventured into the city was to attend Sade’s concert. My friend treated me to front row seats. It was definitely one of the concerts that I have enjoyed most in my life. After watching them playing live, I became an even bigger fan of their music. That day, I also walked a bit around Vancouver trying to get into the city’s vibe. But I noticed that after spending so much time in small towns surrounded by nature, city life was not as fascinating as it once was.

What I ended up enjoying most about my time in Vancouver was the sushi. There are lots of places available for all types of budget, from the all-you-can-eat variety to the most exquisite and luxurious. Anytime, I hit the city my answer to the old question: “what do you feel like eating?” was invariably the same: Sushi!

Previous Post
An Afternoon in Victoria, BC
Next Post
Visiting The Royal Tyrrell Museum in Drumheller
Close