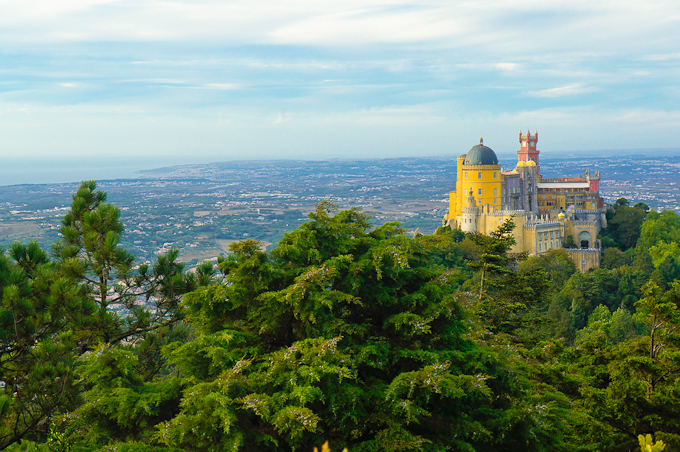 Avoiding the Crowds at the Pena Palace in Sintra

This past summer, when I did my research about Sintra before heading there to spend two months, I was captivated by the town’s fairy tale-like architecture. One of the buildings that stood out the most was the Pena Palace, one of the finest examples of 19th century Portuguese Romanticism. The palace is a UNESCO World Heritage Site, one of Portugal’s Seven Wonders, and one of the most visited monuments in the country.

During the seven weeks I spent in Sintra, I kept putting visiting the palace off because I simply don’t like crowds; and as summer progressed the charming little town got swarmed with waves of tourists, most of them flocking to see this particular sight. So on my very last week, I had no choice but to head up the Sintra hill and do my best to avoid the crowd to enjoy this site.

First thing I did, was to avoid taking the 434 bus line which is the preferred means of transportation for the gazillions of tourists who visit Sintra most days in August. Instead, I chose to climb up the hill on one of the small and remote trails I had discovered during my exploration of the park; and it was blissful! Not another human being in sight :) Now, if you must ride the bus, be ready to fork out about 5€ (!!!) and to have the same space as a sardine in a tin can :(

The trail brought me pretty much straight to the entrance of the Lakes, which is a bit less crowded than the main entrance. There are three different entrance fees for this site and I chose the one that includes everything: all areas of the Palace, the Chalet of Countess of Edla and the park; for which I payed 13,50€. In retrospect, I should have chosen any of the other two options which don’t include the interior of the Pena Palace; because a) it was pretty crowded inside, and b) it wasn’t very interesting to me, just a bunch of old furniture IMO.

The best part of visiting the Pena park is to wander outside, following the many small trails that take you into the forest and which connect its different areas. Since most people who visit are coming from Lisbon just for the day, they mostly stick to the area around the palace; but this is just a small fraction of the park as it covers almost 85 hectares of terrain. It is massive and you could easily spend a few hours wandering around.

Standing in the middle of this green paradise, it’s hard to imagine that once this used to be a barren hill; but thanks to King Ferdinand II, it was transformed into a vast forest with tree and plant species brought from exotic and distant locations. Thus, the landscape was totally changed with the introduction of big North American Sequoia trees, Western red cedars, Chinese Ginkgo, among others.

However, King Ferdinand II was not alone on this project; as his closest collaborator was his second wife, Elise Hensler, Countess of Edla. She was an opera singer with a broad education who shared many of the King’s interests, botany among them; so soon after they met they fell madly in love, to the dismay of some royal family members and the public. In the end, they got married and lived together in Sintra.

Together, they built the pretty Chalet of the Countess of Edla, inspired by Swiss chalets and rural houses from the United States. The house is modest, but very cosy; I particularly loved the detail of the branches sourrounding all the windows and doors in the exterior. This building was damaged by a fire a few years ago; and after a restoration process that started in 2007, it was only recently that it has been opened for visitors.

Finally, for the best views in the park, the hike up to the highest point of the Sintra hill (529 meters) is well worth it. The site is marked by the Cruz Alta, a cross carved in stone in the shape of intertwined branches. This is the point from where I took the first photo in this photo, the view is truly breathtaking.

For more practical information about visiting the Pena Palace and Park, you should check the Parques de Sintra website. Also, if you’d like to see the rest of the photos from my visit, check out my gallery here.

All stories by : Bianca Bauza
6 Comments