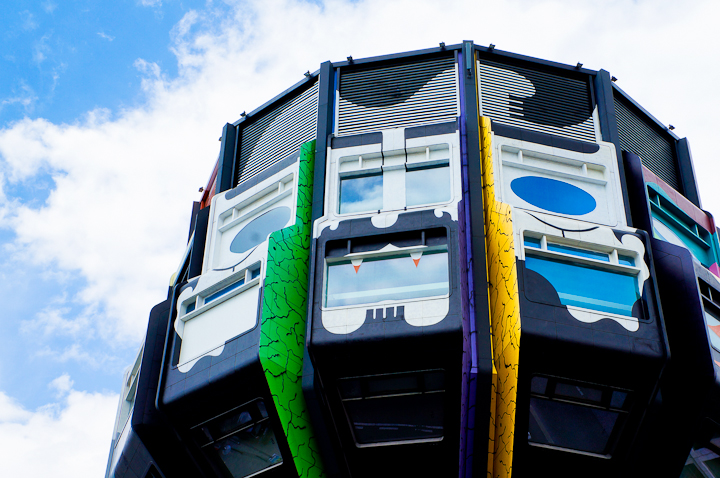 Since the first time I set foot in Berlin back in 2004, I became fascinated by its street culture, its music scene and the mix of creative people trying to make a buck doing what makes them tick. Also, I love that there are so many more green spaces in comparison with my former hometown, Barcelona. I liked the city so much that I had decided to move there, just before my relationship with my ex came abruptly to an end.

Still, when I decided to come back to Europe, I knew that I had to visit. Things haven’t changed much, maybe the only thing is that you hear way more Spanish while walking on the streets. Most of my favourite places are still around and even some of my favourite street art ever hasn’t disappeared; like the double mural below by Blu, Bologna’s most famous street artist.

This time I was also glad to find new pieces and places in Berlin for street art that I hadn’t seen before. One of the nicest surprises was finding the mural pictured below by Colombian artist Stinkfish. Since I saw some of his art in Bogotá, Colombia I became a big fan of his work and would love to see some more of it as I make my way around Europe.

My biggest find this time was of a new place (for me, at least!) called Turmkunst; a project in which several artists: Flying Förtress, Honet, Sozyone and Craig‚ KR‘ Costello painted over a high tower over the Steglitz neighbourhood. The tower was built in the seventies and stands 46 meters above the Schloβstraβe metro station.

The project took six weeks to complete and it’s an impressive monument to modern street art; but it doesn’t end there. Just below the tower and before entering to the metro station there are some beautiful and colourful murals that combine perfectly with the matching pop art feeling of the Schloβstraβe metro station.

Also, there are more murals inside the station; like the ones on the stairs leading to the train platforms. It feels like walking into a playground :) If you like Berlin street art, then a little detour to this off the beaten path area is worth your time; as the works on display are quite well done and special. For the full photo collection of my visit to the Turmkunst and other Berlin street art finds, don’t forget to visit my gallery.