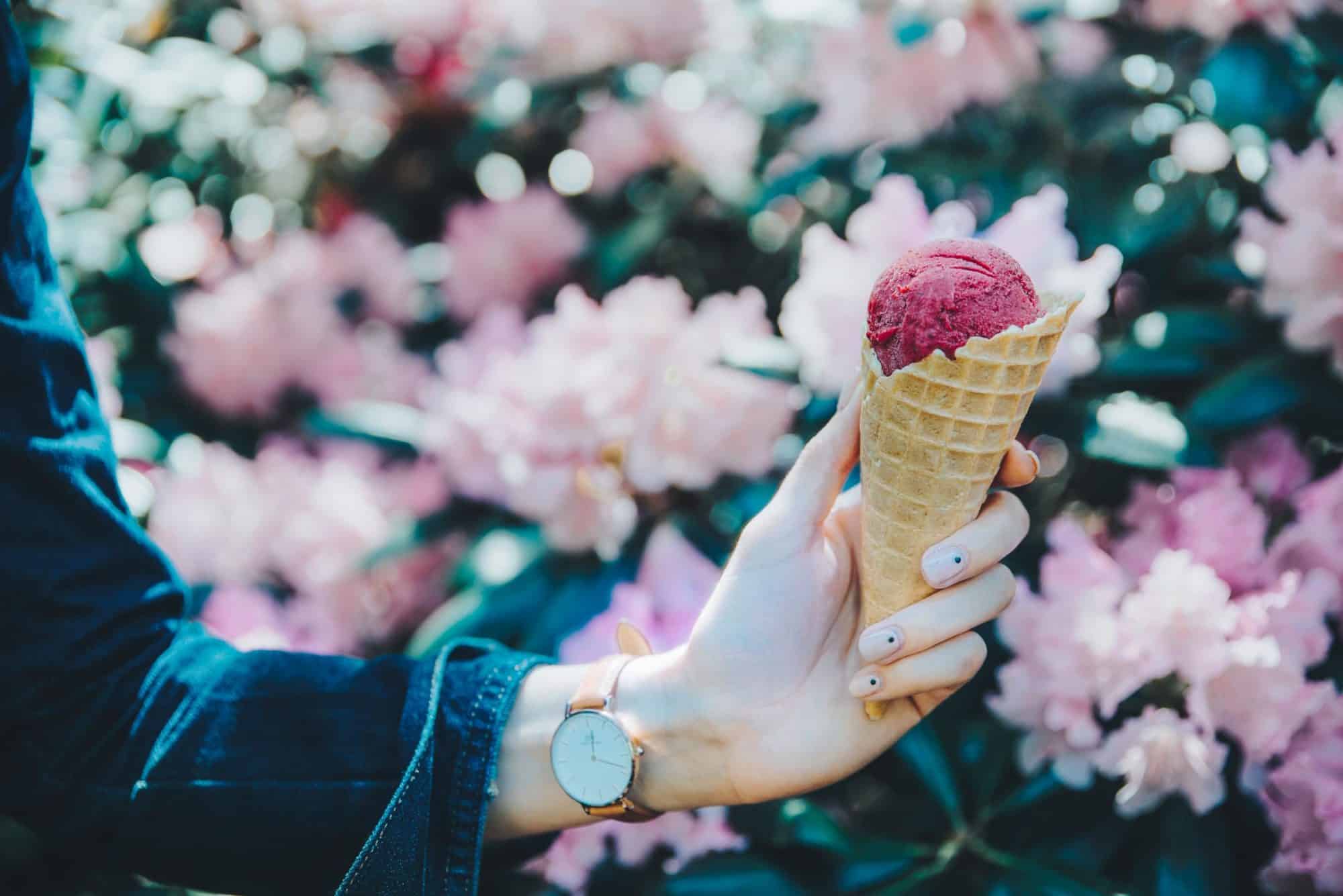 Featuring 14 fantastic places, this is the ultimate guide for finding the best gelato in Rome. We’ve also included a map and useful tips to help you find your way!

One of the greatest pleasures of visiting Rome is to indulge in tasting as many Italian delicacies as your belly can hold. And as soon as temperatures rise, the cravings for gelato go up as well. The good news is that you can get some pretty much on every corner. The bad news, however, is that not everything you see is indeed the real deal. So, you might wonder, where can you find the best gelato in Rome?

We have some great recommendations for you. But first, let’s start with some useful tips on how to spot the authentic Italian gelato, which will help you avoid the tourist traps.

What is Gelato and How to Spot it

Below you’ll find our picks for some of the places (all sorted by area) where you can taste the best gelato in Rome. For addresses and contact details, click on the map at the end of this post.

Where to Find the Best Gelato in Rome

One of Rome’s most famous gelateria, Giolitti was established in 1900, and it’s still a family-run business. Their location tucked away in a little alley near the Pantheon is where it all started. It might not be a favorite for many locals, but its gelato is still better than a lot of what you can find in Rome. Plus, they have a lot of flavors to chose from, although not very unusual ones.

It’s usually packed, and you need to first pay at the counter before getting your gelato. Prices are quite decent. For example, you pay €2,80 for a small gelato including two flavors. Also, be aware that if you want to sit, you have to pay extra.

Best for: getting some nice gelato near the Pantheon. Try the caramelized fig flavor!

Offering many interesting flavor combinations, such as raspberry and garden sage, lemon with basil, lavender and white peach; the Gelateria del Teatro uses only the best of ingredients to produce their gelato. They also serve several milk-free options and have gluten-free cones. Plus, through the front window, you can actually watch they make gelato from scratch.

They have two locations: one near Piazza Navona and another near Campo de’ Fiori. When it gets busy, you need to take a number and wait for your turn. Their granita, an Italian-style water drink made of crushed ice is great as well.

Best for: out-of-the-ordinary and unusual flavors.

A relative newcomer to the gelato scene, GROM has managed to carve a nice following. In fact, you can find them not only in Italy but in a few other countries as well. They only use fresh ingredients so they always change their flavors according to what’s in season. In Rome, you can find several locations around the city, so this is always convenient option.

Their whipped cream is legendary, so just go ahead and have some.

Best for: authentic gelato with a modern twist.

Located just a couple of blocks away from Piazza Navona, Frigidarium serves amazing gelato at great prices and is open till late every day. Their signature flavor is a perfect mix of chocolate and caramel. And, without doubt, this gelateria scores high with fans by offering to dip your gelato in chocolate to create a crunchy crust.

With its creamy gelato, reasonable prices and excellent flavors, this gelateria is definitely worth the detour and standing in line for.

Best for: the creamiest gelato at unbeatable prices.

Tucked away on a little side street not far from the Trevi fountain, this small gelateria is a great find. La Strega Nocciola offers some creative flavor combinations made out of fresh seasonal ingredients at reasonable prices. Also, since it’s a bit off the beaten path is not as crowded as some of the other places on this list.

There is a sitting area inside, so you can take a break from all that walking while enjoying your gelato. Oh, and the strawberry – basil combo is always a great choice!

Best for: escaping the crowds near the Trevi fountain and the Spanish Steps.

READ THIS POST
A Guide to the Best Gelato in Venice

If you can only go for gelato once while in Rome, then head to one of Fatamorgana‘s several locations around the city. Using just fresh and natural organic ingredients, you won’t find any preservatives or artificial flavors here. Furthermore, all of their is gluten-free; plus, they also offer vegan options as well as sugar and lactose-free flavors.

However, what keeps most people coming here are their out-of-this-world flavor combinations, which include their best-seller basil, walnuts, and honey; wasabi chocolate; cumin, sesame, and coriander; and chocolate with a tobacco infusion. This is the place to go wild!

Their location in Centro Storico is open till 11 pm (till midnight on weekends), so you can indulge in some delicious gelato before heading back to your accommodation. Also, if you have food allergies, you’ll appreciate that everything is clearly labeled. Plus, you can taste five of their amazing flavors for €5.

Having been in business for over 130 years, Fassi is the oldest gelateria in Italy, an authentic Roman institution. Located near Piazza Vittorio Emanuele, this hidden gem is almost always full and even a bit chaotic. However, their prices are very budget-friendly.

It can get crowded, but the line usually moves along quickly. You need to pay first at the register and even though prices are low, you can pay by card.

Best for: some unusual flavors, such as rice!

Come Il Latte uses only high-quality dairy products to create the creamiest gelato in Rome, which has up to 70% fresh cream. However, they also have a good selection of milk-free options for the lactose-intolerant. Plus, you can go crazy trying the different toppings they offer.

The housemade cones with dark or white chocolate add an extra sultry touch to their creamy gelato.

Best for: an excellent choice for when you’re close to the Termini train station.

Established in 1947, what first started as a family-run gelateria has grown to a network with locations all over Italy. In Rome alone, there are three. Gelateria La Romana serves artisan gelato with a conscience. They follow rigorous production methods, use only eco-friendly packaging, and publish a full list of ingredients on their website.

There are three locations in Rome: Termini, Testaccio and Prati and they’re open till midnight most days (until 1:00 am on weekends). Plus, their prices are very reasonable.

READ THIS POST
Off the Beaten Path: 12 Unusual Things To Do in Rome

Set in the heart of Trastevere, Otaleg (which is simply gelato spelled backward) is a relative newcomer to the gelato scene. Visiting this gelateria is well worth the detour so that you can taste some of their original flavors made with gourmet ingredients. Plus, their laboratory is located at the front of the shop, so you can watch as the magic happens.

They serve some of the best pistachio flavors (yes, that’s plural) in the city. And they offer several chocolate gelato options. What more could you ask for?

Made with certified organic and fair-trade ingredients, Fior di Luna has been using ethical practices long before it became trendy. They make authentic artisanal gelato and are passionate about chocolate as well. Sometimes they offer gelato-making courses. For something different, try their sorbets, which are made with fresh seasonal fruits.

They only take cash. Also, compared to other places, they have a smaller selection of flavors; but those they do have, they do them very well. Both their pistachio and hazelnut chocolate flavors are to die for!

Best for: one of the best options for gelato in Trastevere.

For those who love pistachio gelato, Gelateria Gracchi is a must. According to many locals, theirs is just the best pistachio gelato in Rome, which is made with coarsely grounded nuts from Sicily. For a sweeter taste, try the pistachio and meringue combination.

Also, their gelato is gluten-free, and they only use local seasonal ingredients with no artificial flavors or preservatives. Plus, there are a few locations around the city. Finally, as if those were not enough reasons to visit, they also have a nice selection of vegan options, made with soy.

They also offer some nice pastries, so if you are in the mood for something different, try those.

Best for: some amazing gelato not far from the Vatican.

There are also several Rome food tours and experiences that include some gelato tasting. Here are our top picks:

With a couple of locations out of Rome’s city center, Il Gelato di Claudio Torce has a knack for pushing the limits when it comes to savory gelato. They offer a long list of original flavors that range from black sesame to celery, to Gorgonzola, to apple strudel. They only use high-quality natural ingredients.

Even though their locations are well off the beaten path in Rome, the trip is well worth the effort. So if you are going to the EUR district, make sure you stop by.

Best for: the most unusual gelato flavors in Rome.

Using high-quality ingredients, including organic Alpine milk, Tuscan chocolate, and fair-trade vanilla; Neve di Latte produces some of the most magnificent artisanal gelato in Rome. Located right near the MAXXI, Rome’s modern art museum, you should definitely stop by if you are in the area.

This gelateria is a little pricier than others, but the superb quality of its gelato and cute atmosphere are worth a visit. Some of their most interesting flavors include ricotta, avocado, and honey.

With all these amazing gelato places in Rome, there is really no excuse to eat mediocre gelato! On the map below, you’ll find the locations of all the places on this list, just click on the icons to see their address.

Map With the Best Gelato Places in Rome

Liked This? Pin it for Later!

Have you been to Rome? Do you have a favorite gelateria you’d like to recommend? Leave a comment and let us know!

All stories by : Bianca Bauza
11 Comments