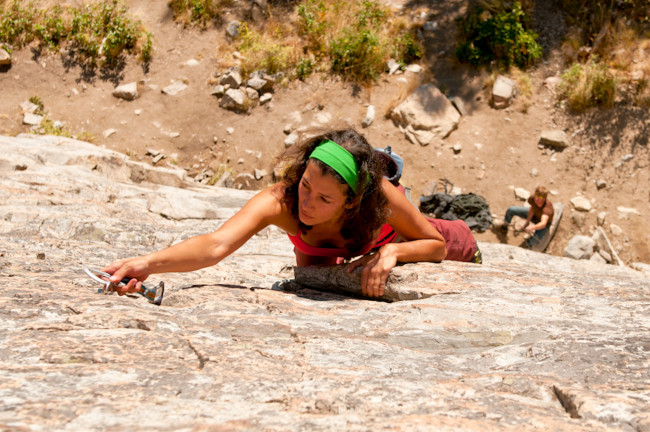 Last year, during my road trip across Canada with Alain; we made a stop for a few days to camp and go rock climbing in Skaha, right on the outskirts of Penticton (British Columbia). Penticton is a small town that lies between the Skaha and the Okanagan Lakes, and it’s located 395 kilometers east from Vancouver. We were mainly interested in visiting this area because of: a) the rock climbing, the temperatures here are warmer and it rains way less than in Squamish; and b) to go wine tasting in the Okanagan Valley.

Fall was moving in fast. We were in a bit of a rush to start moving across the country. We didn’t want to get stuck sleeping in our van when the temperatures start dropping. During our first days rock climbing in Skaha, the weather was kind of cold, gray and a bit wet. But we were so eager to get on the rock that we did our best to enjoy it.

Luckily for us, it only took a couple of days for the weather to change back to sunnier and warmer days and we were glad we got some sunshine during our stay. Skaha is one of Canada’s prime spots for rock climbing, there are about 650 routes on fine gneiss with nice features and edges. By the time we got there, I had already been climbing steadily for a few months in Squamish and I was ready for new challenges.

The hardest route I had ever attempted to climb was Test of the Ironman 5.11b (6c) on The Great White Wall, a huge 40 meters high wall of white rock, which is one of the best and hardest walls in Skaha. When I decided to go for it, my friends advised me to not look to the ground, so I wouldn’t get intimidated by the height; and to try avoid using my arms too much, so they wouldn’t get too pumped. However, when I managed to get to the crux, which is only about 5 meters away from the anchor; I was too exhausted from the effort and had to come down. One day, I will go back and finish this test!

Skaha was also special for me, because it’s the place where I did my first ever lead climb. So far I had only followed and lead climbing was a total different game for me. Thankfully, my friends were very patient with me and explained all the different in much detail the correct way of doing every step. Since the risks of lead climbing are greater, it’s very important to pay attention to everything that you’re doing to ensure your safety. What I liked the most about this type of climbing, is that my level of focus is so much greater; I don’t get into the same zone doing anything else.

After a hard day of rock climbing, it was nice to go back to the Banbury Campground to have a shower and make some dinner. We had a sweet set up in our van, so it was warm and cozy inside despite the colder temperatures. Besides, since we were coming from Seattle; we were loaded with plenty of goodies to make nice dinners, including a couple of cases of Alaskan amber ale. My time rock climbing in Skaha was one of the highlights of my time in Canada, and I wouldn’t hesitate to go back. For the rest of my photos, don’t forget to have a look at my gallery.