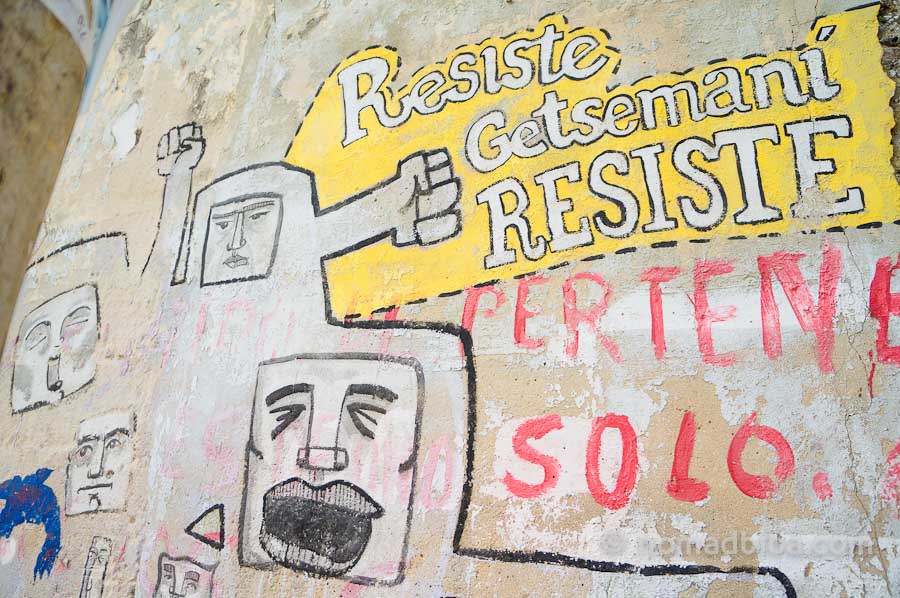 Last time I visited Cartagena, I wasn’t expecting to find that much street art. Inside the old city walls, there is little space for graffiti; given its status as a UNESCO World Heritage Site. However, the Getsemaní district is a different story. In colonial times, this was the area where the African people who were brought as slaves used to live. When slavery was abolished, the neighborhood retained its working class status.

In Getsemaní that working class character is still present today. But there is a major shift happening as a growing number of hostels, restaurants and bars are flourishing in the area; attracting more travelers. At least those who can’t afford or prefer not to pay the higher prices of accommodation inside Cartagena’s old city walls. Some of that is reflected on the walls of Getsemaní, as calls encouraging resistance.

Also, many of the graffiti that I saw pay tribute to Pedro Romero, a Cuban artisan of African descent who played a key role in Cartagena’s struggle for independence from Spain.［Edit August 2013］These works are part of the 2010 project Pedro Romero Vive Aquí. Since there are no visual records of Pedro Romero, this initiative was an invitation to several artists to portray him. Now, a couple of centuries after his lifetime, his memory lives on in Getsemaní on many of the murals found in Calle de la Sierpe (Snake Street; or calle 29 if you ask Google Maps).

Another cool find on that same street, are the faces of London-based artist Fin DAC; who during a recent trip to Colombia went around adding some color to some of the most neglected barrios in Colombia. According to his own words, “I create my art to keep myself happy. If others like it then that’s a great by-product”. If you’d like to see more photos of my time in Cartagena, you can visit my gallery.

Have you been to Cartagena? Have you seen some more cool street art? If you have an interesting link, let me know in the comments below.