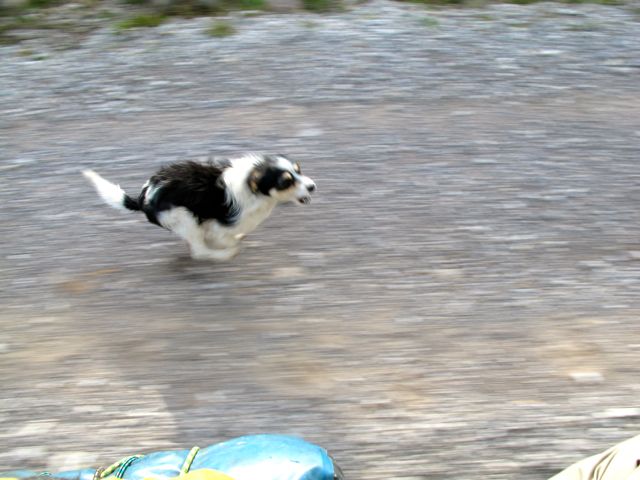 Colombian dogs can be very peculiar. They roam freely on the streets and decide to adopt you in a whim. In some small towns we visited, dogs just started to follow us around as if we had been buddies for years. In Salento, for example, we had at one point a pack of four dogs following us back to the hostel.

First, there was a couple of females (mother and daughter, apparently). They were tagging along happily, when out of nowhere came this stud that was determined to mount the younger female. He spent the whole way chasing after her. She was very young and had lots of energy to burn. She was relentless. On the other hand, he was older and had to stop every once in a while to catch his breath. At times he would throw half-hearted attempts in the direction of the older female. But she would just get away and give him an unconcerned side stare. Then a fourth character appeared, but he stayed in the background just following along.

During our time in Suesca, we were adopted by dogs several times. So there was usually a dog, or two, wherever we were staying. When we stayed in Casa de Floro, there was Camila, my favourite mutt, with her beautiful and shiny black coat. There was also the stinky little dog pictured above, with strong short little legs, who was starved for affection.

There was also a beautiful creamy Labrador who liked to hang out at the house sometimes. And we got occasional visits from a Rastafarian Chow Chow, looking for any food we might have thrown out.

However, not all dogs were cool around there. One morning, I was jogging down the road when I heard loud barking through my techno music. When I looked around, I saw a pack of four dogs running straight towards me. They were led by the meanest looking dog ever. And they were all baring their teeth at me. Adrenaline started rushing through my body and I got on high alert mode. I was trying to get away as fast as possible while screaming at them. However, the mean looking dog was relentless and got close enough to throw a bite at me. Fortunately, he only managed to inflict a light scrape just above my calf.

After this first encounter, I saw that evil dog twice again. Each time, he tried to attack me. I managed to keep him far away by picking up stones and threatening him. It is a real shame that people let their dogs get to that state. That mean dog seemed to be some sort of hunting breed. You know, the kind that English lords take on hunting expeditions. But he looked as if he had been neglected to the end. His eyes were full of resentment. Unfortunately, I couldn’t snap a photo of this dog. I was too afraid for my safety to even dare taking my eyes off him.

Incidentally, Alain also got attacked by some random dog when we where walking around the streets of Suesca. A dog came charging at his leg, just out of the blue, and bit him for no clear reason. But overall, the experiences were definitely more on the good side than when we crossed paths with those two rotten apples.

Previous Post
Whistler, BC – Fun Up In The Mountains
Next Post
Suesca – Climbing in Valle De Halcones
Close