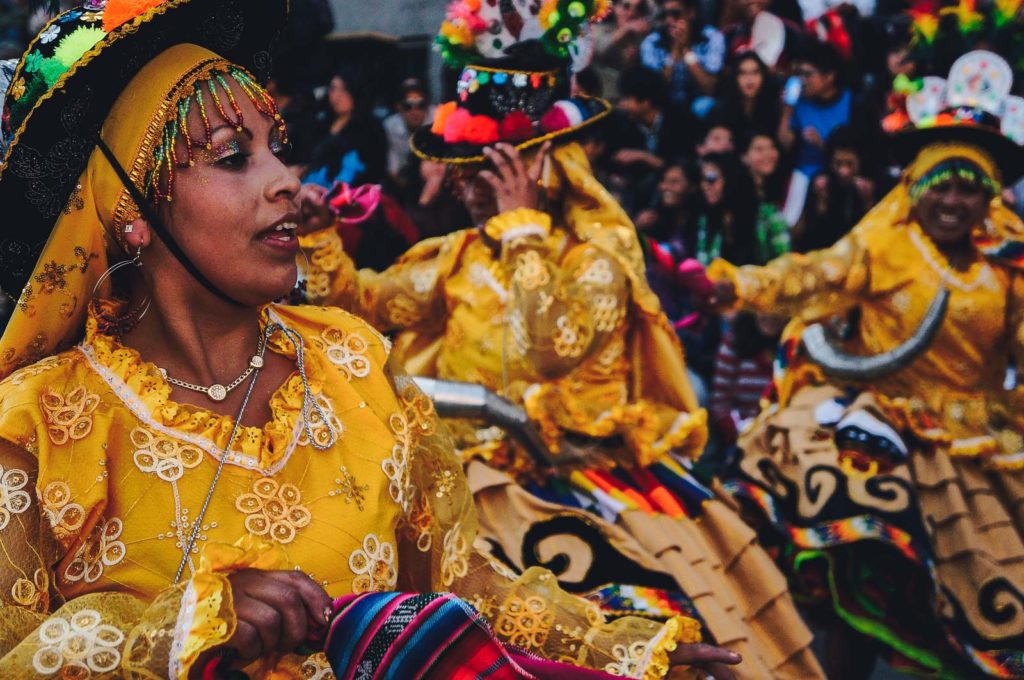 Entrada Universitaria: A Bolivian Parade That’s Out of This World

Of all the countries in South America, Bolivia is one of those that stands out the most because of its rich cultural expressions. When you travel around this land-locked country, you can witness at every corner signs of their ancestral roots. And their indigenous culture is very much alive and kicking, perhaps more so than any other country in the continent. While I was based in La Paz, during my trip around South America, I was lucky to see some very impressive parades.

Entrada Universitaria: An Epic Show of Sounds And Colours

The Entrada Universitaria is a massive parade that takes place every year on the last Saturday of the month of July. The Universidad Mayor de San Andrés (UMSA), Bolivia’s largest university, organizes the event, hence the name of the parade. The goal of this colourful procession is to preserve and promote the country’s culture and traditional dances. The university gives credits toward their degrees to the students that take part in the parade. So every year some 15,000 students from 63 different faculties dress up in shiny colourful outfits and fill La Paz with music and dance. 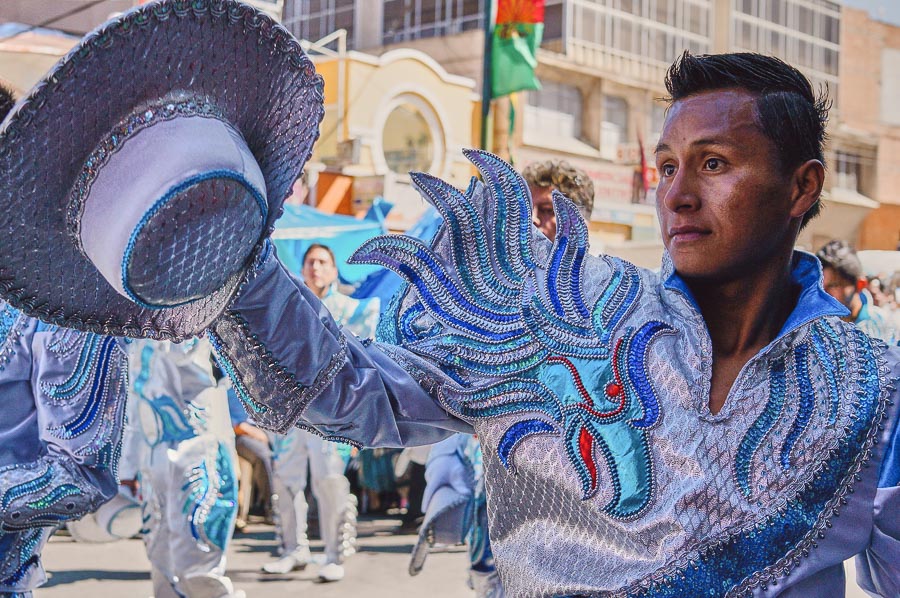 Starting early in the morning, the first groups of dancers take their place and start walking and dancing down some of the city’s main avenues. The whole parade lasts about 15 hours. One of the most popular events in La Paz, the Entrada Universitaria features some of the main folkloric dances of the country. Anyone seeing these dances for the first time would be mesmerised, each is more colourful and peculiar than the last. Here are some examples:

One of the most recent additions to the nation’s cultural traditions, the Caporales dance is only about 50 years old. It was inspired by the figure of the Caporal, the foreman who oversaw the slaves and used to wear boots and held a whip. The costumes for this dance are shiny with elaborate details. The women wear fitted long sleeve tops with puffy shoulders and mini skirts; while men wear shiny suits also with puffy shoulders and massive bells attached to their boots. 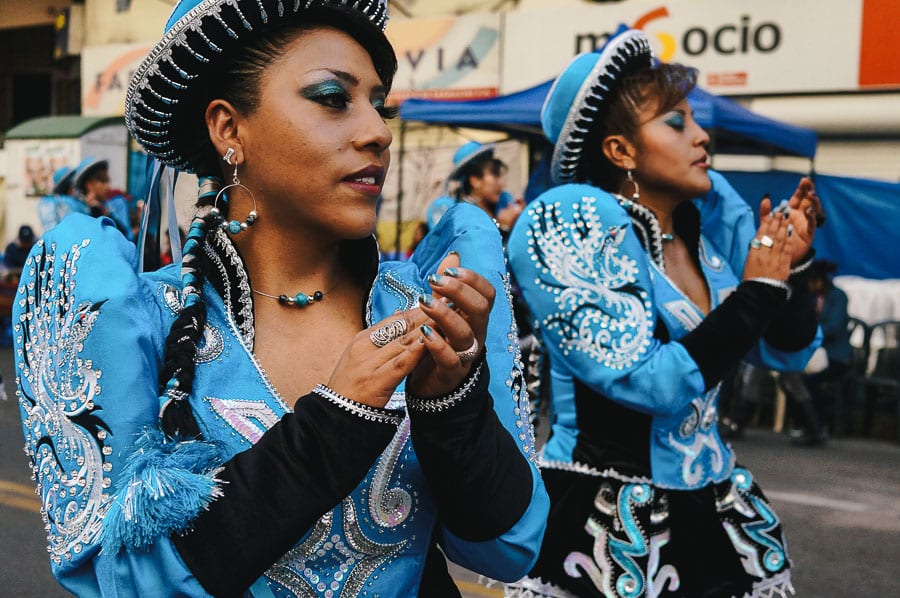 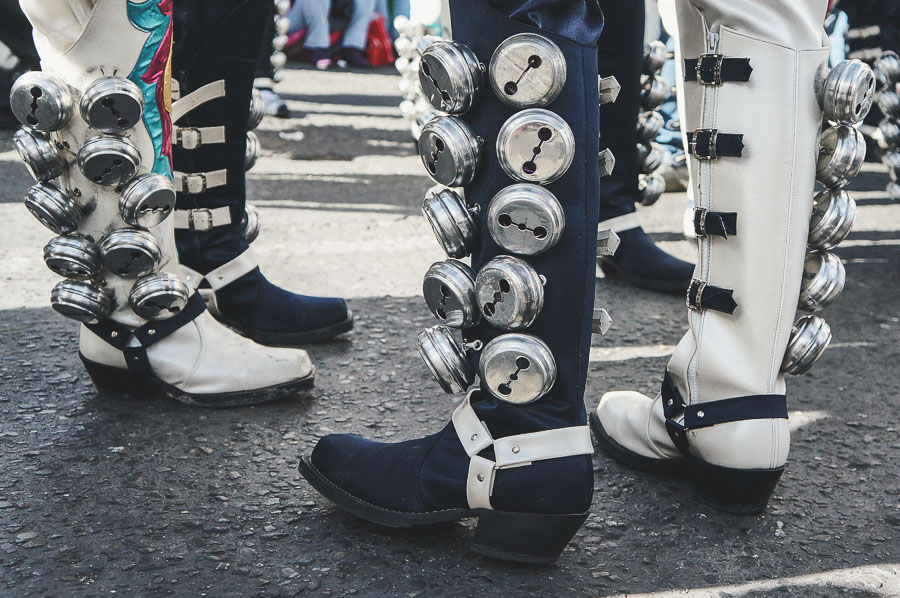 For this dance, the women advance first in a group twisting and swaying their hips. The men follow with an elaborate choreography of kicks and jumps that make their bells rattle. Lately though, is not unusual to see women taking the role of the caporal, opting to wear the pants and boots outfit to perform the more complex dance moves; instead of simply looking pretty in a mini skirt.

There are different theories about the origin of the Morenada dance. The most widespread theory says that it was inspired by the suffering of black slaves brought under the Spanish colonial rule to work in the silver mines of Potosí. The dance presents in a satirical way the harsh working conditions that the slaves endured, with the rattling of bells representing the sounds of slave chains. Dancers wear elaborate outfits that can weight up to 15 kilos (33 lb.) 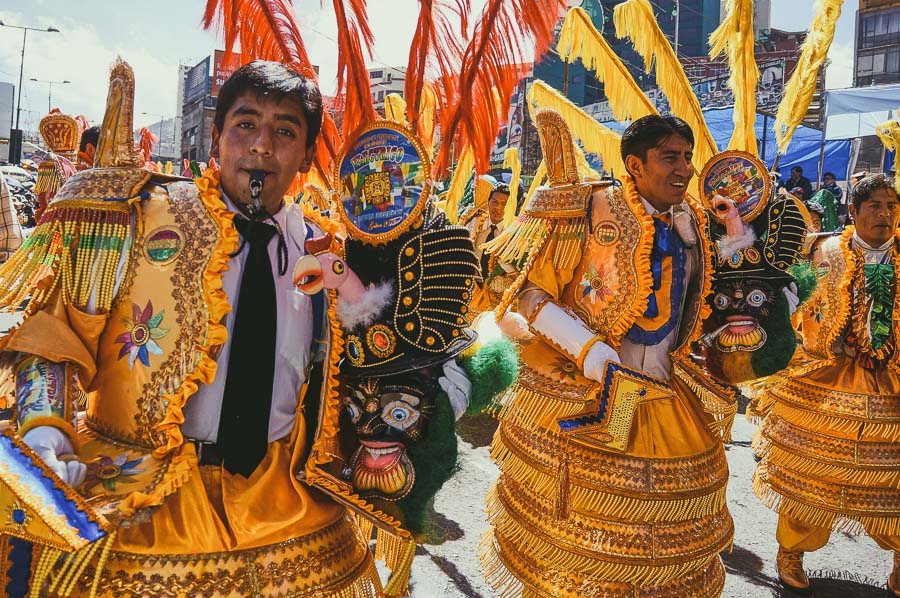 This Bolivian folkloric dance is based on the time when the Inca empire came to conquer the region, forcing other tribes to move up to the high plains. This dance celebrates the bravery of one Amazonian tribe, the Tobas warriors. For this dance, the colourful outfits are adorned with feathers and move forward with jumps and hops. 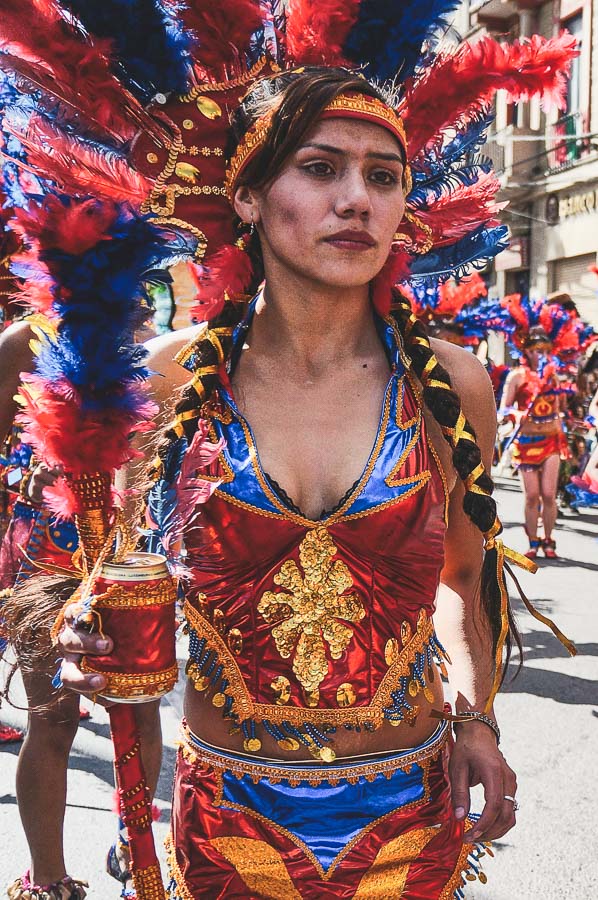 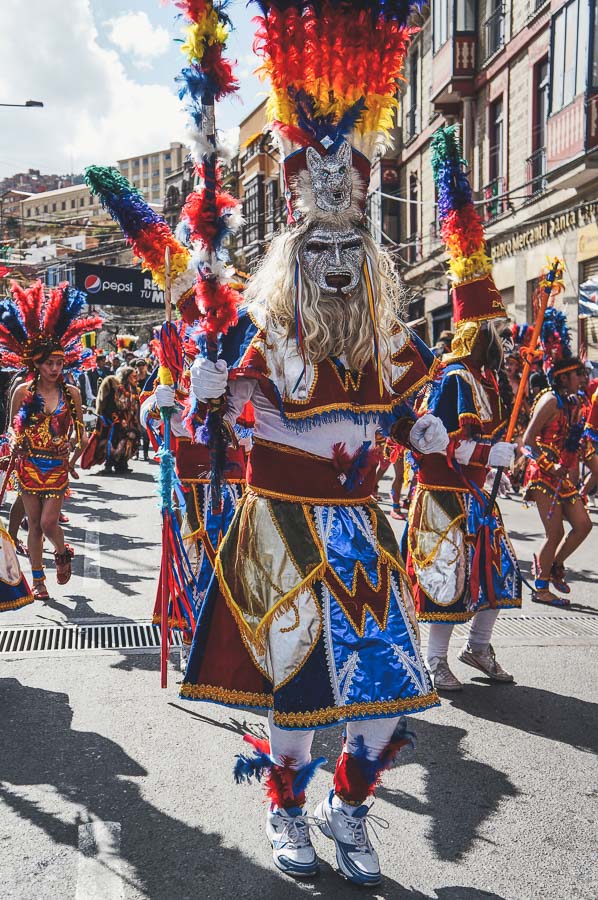 Another spectacular dance, the Diablada portrays the struggle between good and evil. Dancers dress as colourful devils with elaborate masks and are led by Lucifer, master of demons. On the other side, there’s the Archangel San Miguel, representing good. 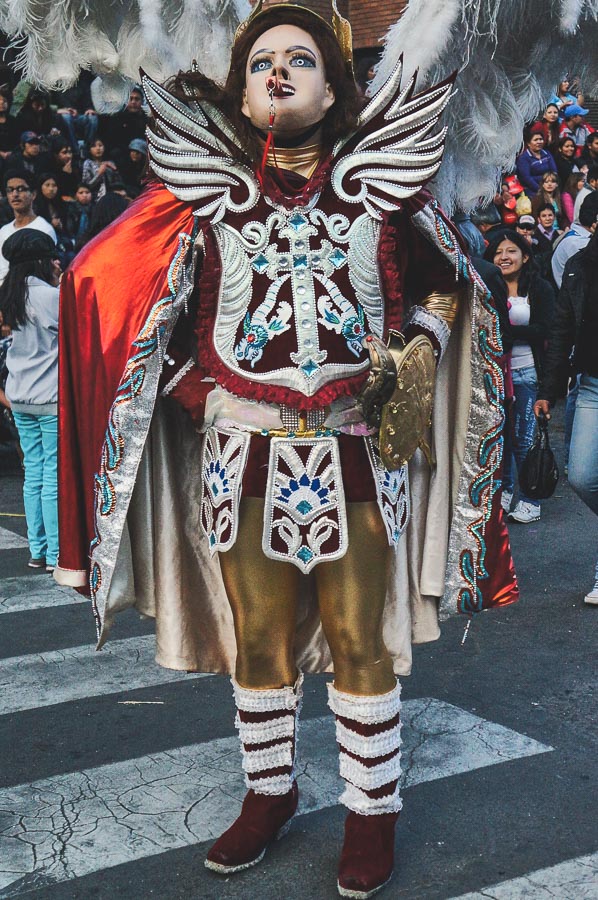 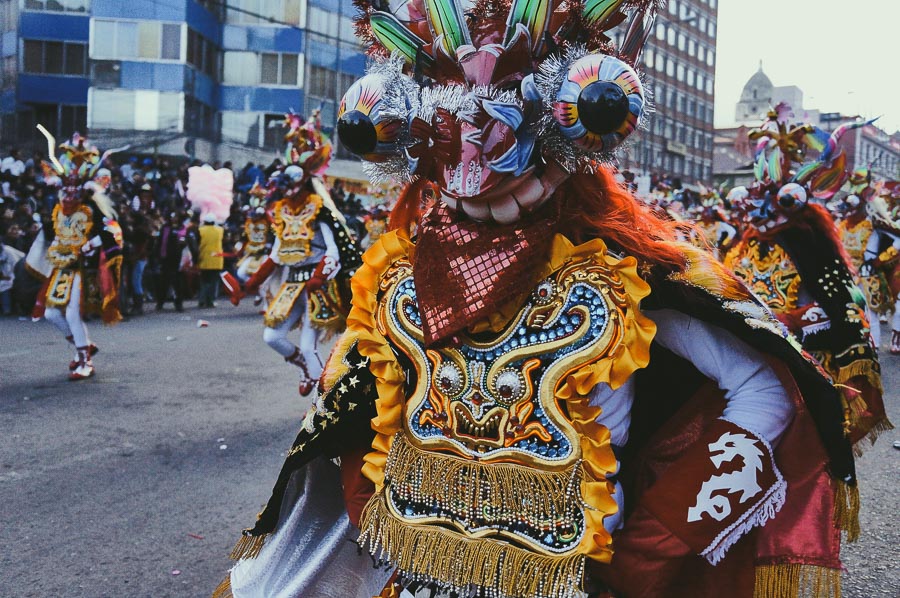 Besides these dances, there are many others: tinkus, waka-wakas, kullawada, saya, etc. Bolivia has a rich cultural heritage and it shows in these amazingly colourful folkloric dances, which show the cultural diversity of this Andean nation. 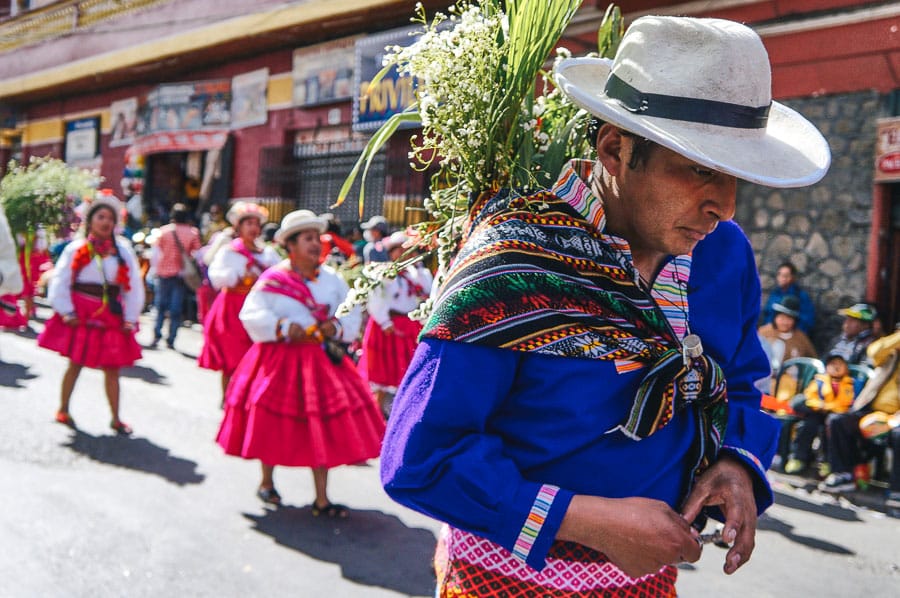 Being in La Paz during the Entrada Universitaria gives you the perfect opportunity to see a full on display of Bolivia’s vibrant culture. In just a few decades, this big parade has become one of the major folkloric displays in the country, along with the Oruro Carnival and the Gran Poder parade in La Paz. 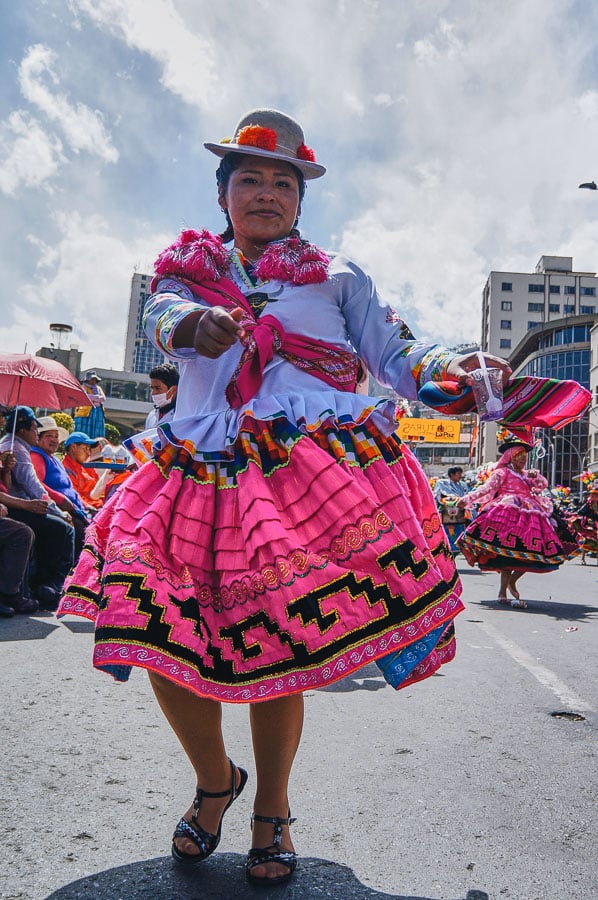 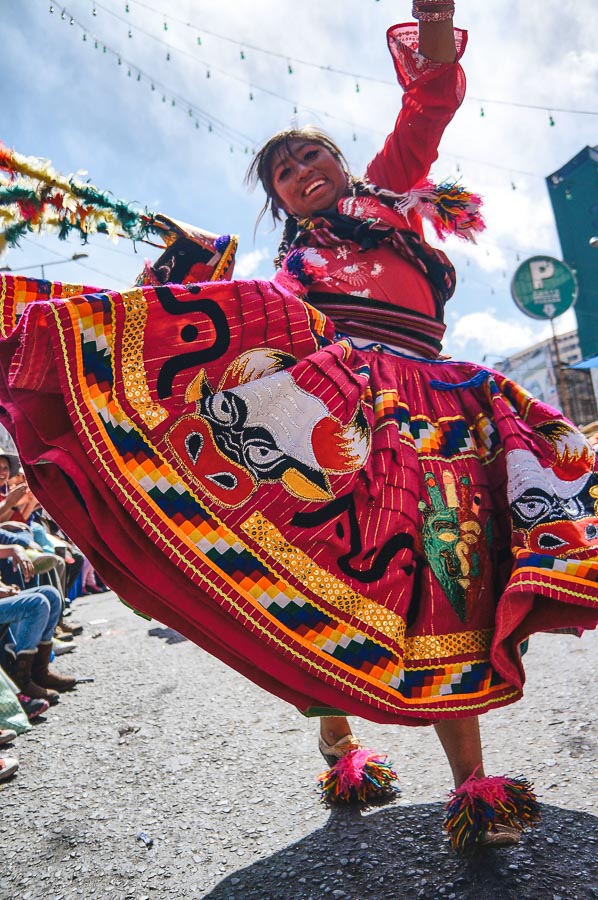 When I was there, I really enjoyed seeing all these dances I had never seen before and this experience made me appreciate even more the rich culture of Bolivia. Also, I was able to get really close to the dancers to take some photos and I loved it! Although, perhaps I got a bit too close as in one time when I got hit by one of the dancers spinning a rope with beads. It hurt a bit and I learned my lesson, but it was still fun. 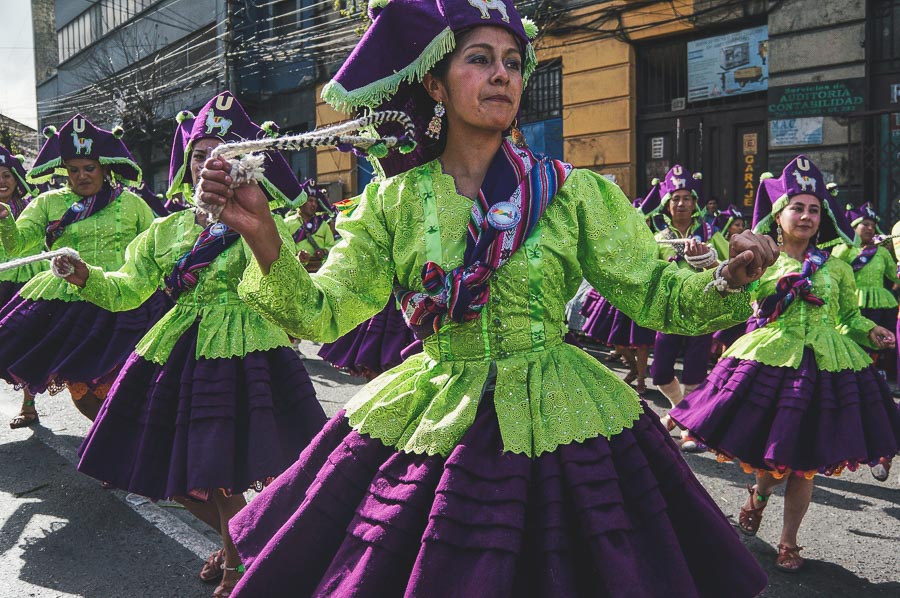 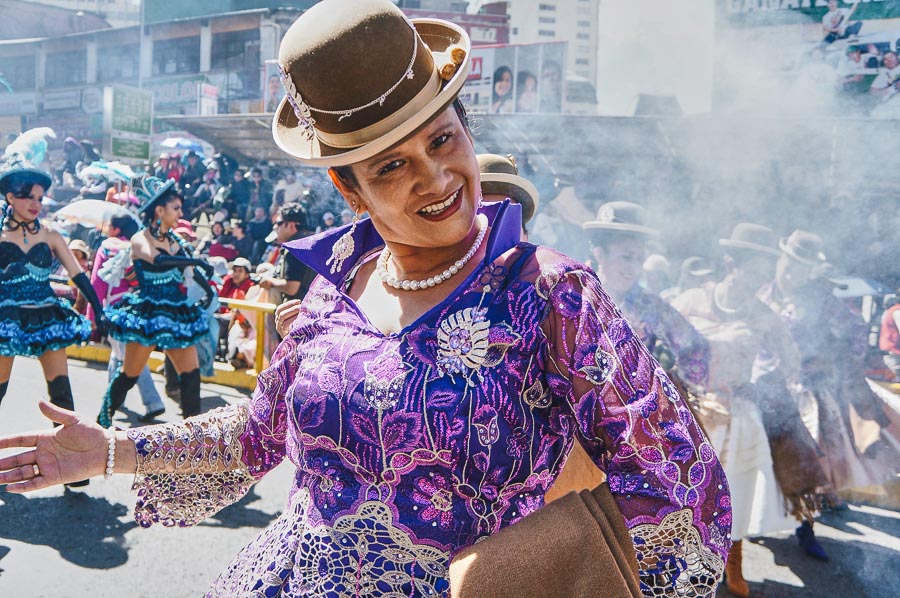 Another fun part of experiencing this parade was admiring the vibrant and richly decorated costumes. People really put great effort into these outfits and it seems that some of them can be quite expensive. Plus, there are others than look quite bizarre, like the sandals below. 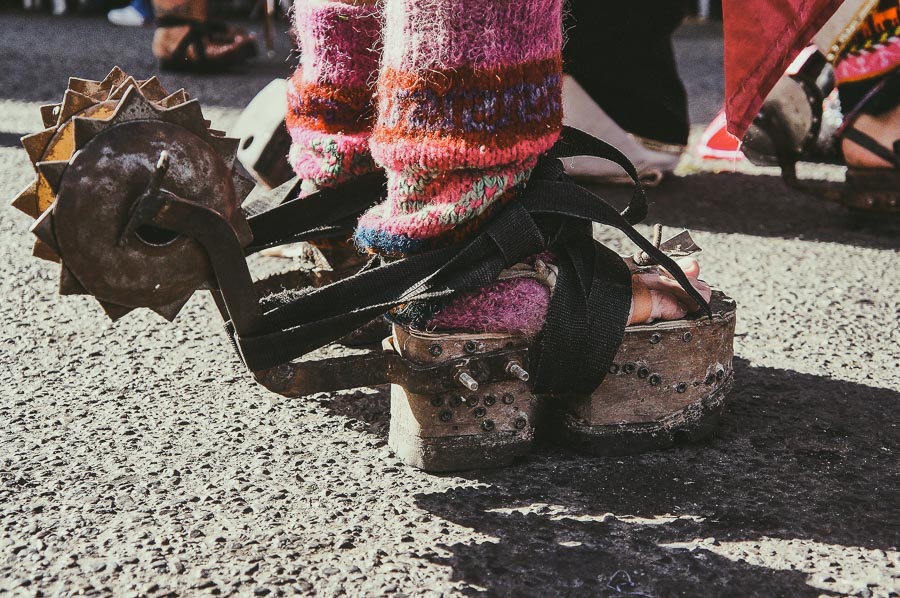 If you are traveling in Bolivia at the end of July and you are interested in seeing local cultural festivals, I would really recommend that you make your way to La Paz to see the Entrada Universitaria. It is a really unique experience that you won’t soon forget! 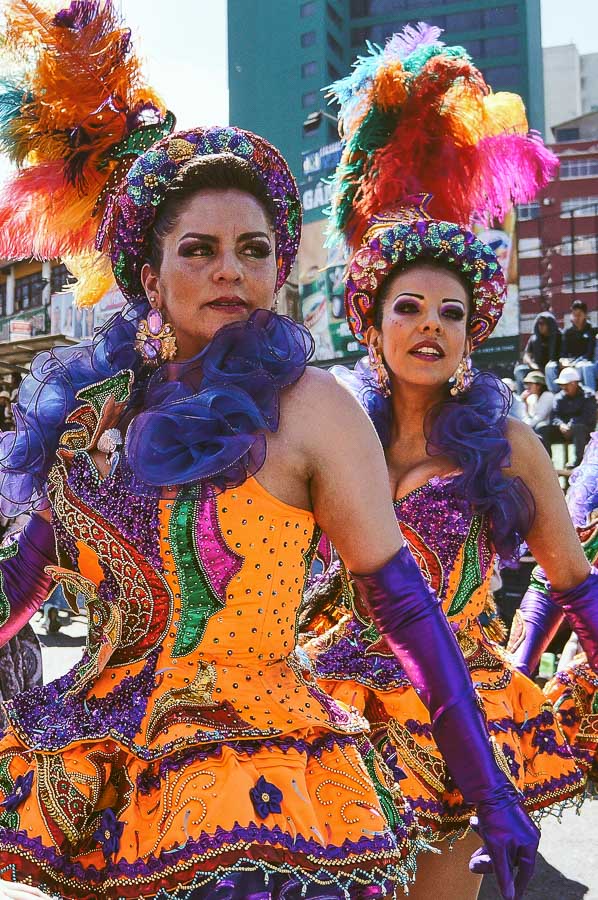 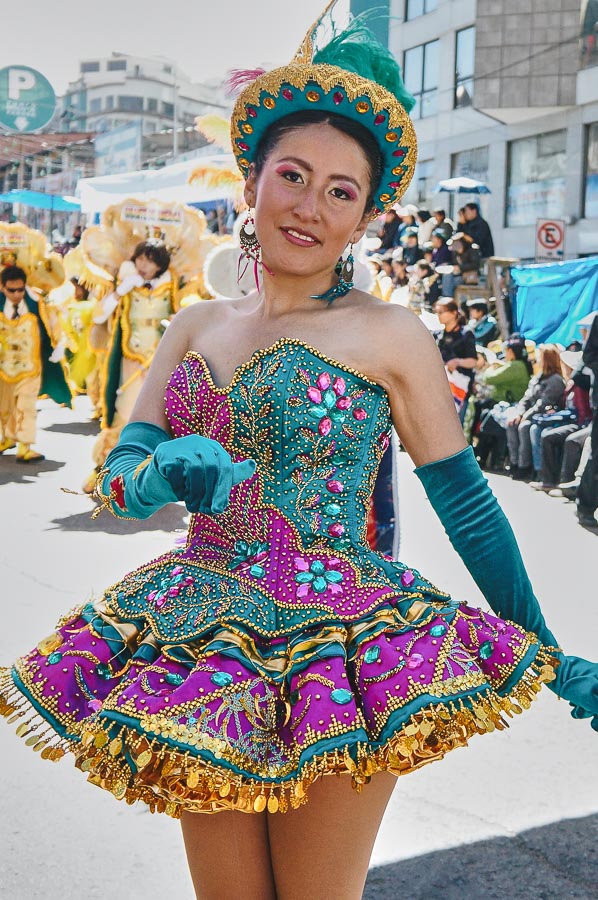 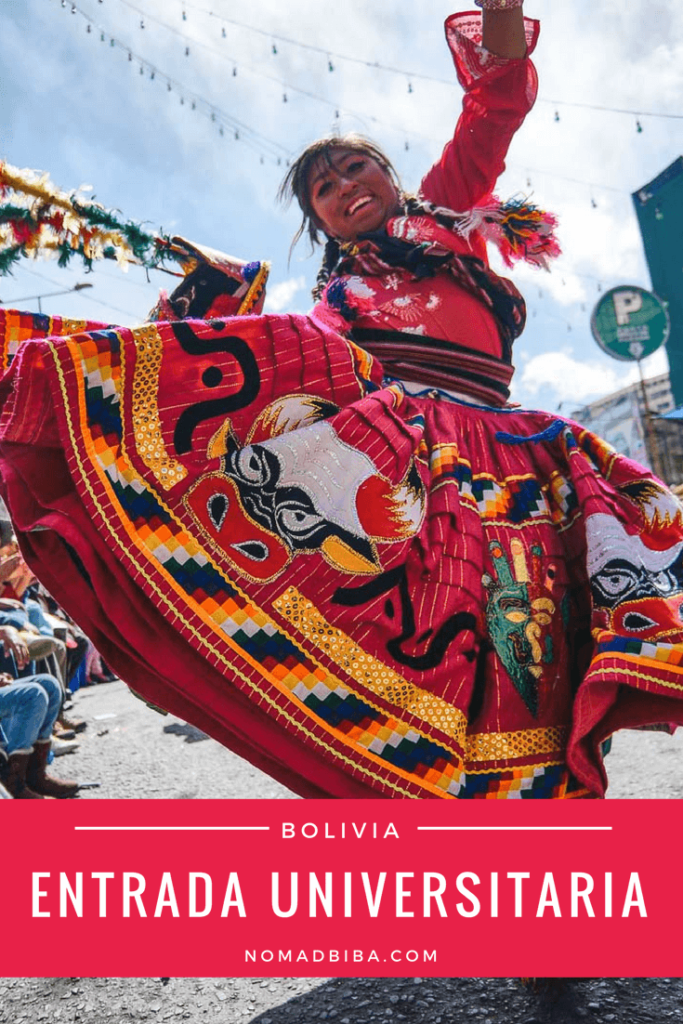 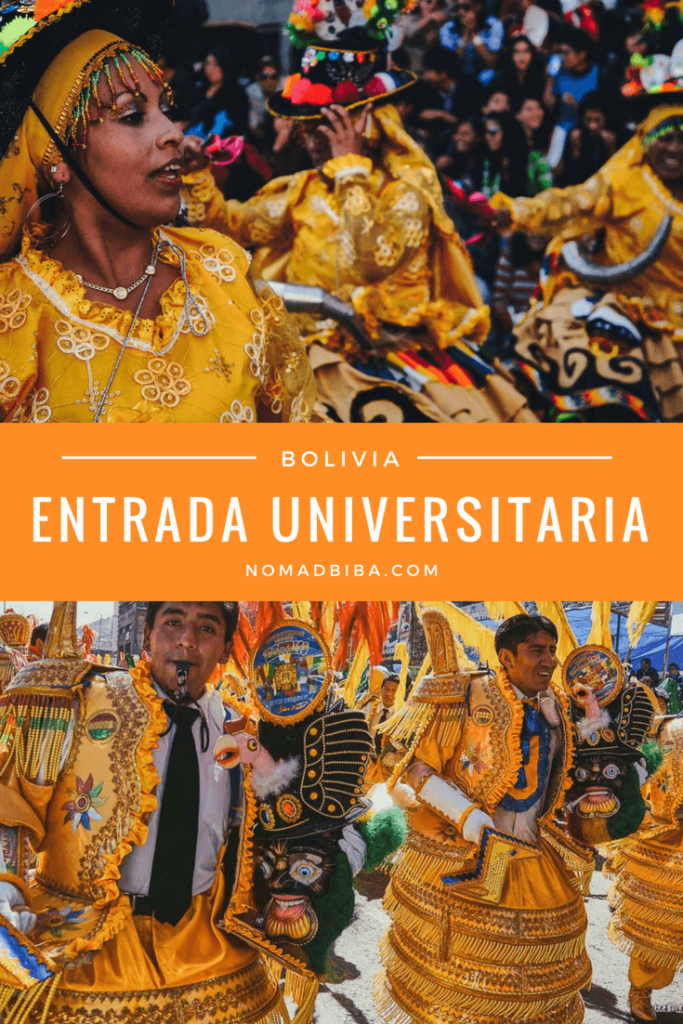 Have you seen any of Bolivia’s top parades? Are there any other cultural events in Bolivia that you would recommend? Leave a comment below and let us know!