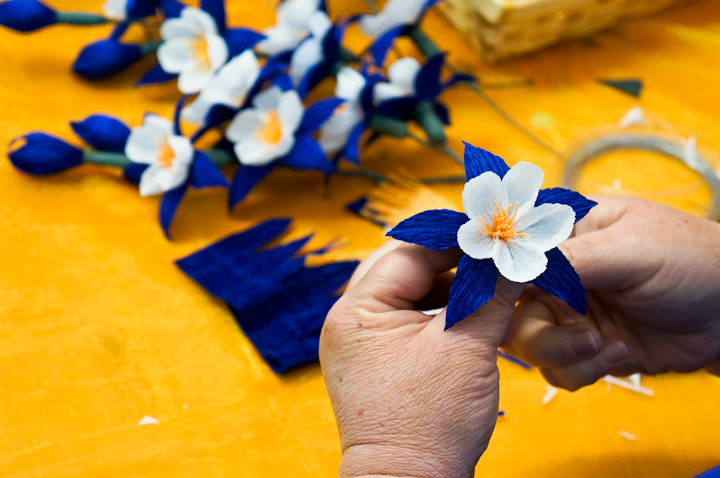 A Preview of the Festa di Santa Croce

Monte Isola is a small island in Lago d’Iseo, the fourth largest lake in Lombardy, which is shared by the provinces of Brescia and Bergamo. Even though the island has a total area of just about 13 km, it reaches the highest point  for a lake island in Europe at 600 m above sea level. There are only close to 2000 inhabitants in this little island, where motorised vehicles aren’t allowed; except for the ambulance, the police and the priest.

To get to Monte Isola we took a boat from Sulzano, which would take us on a tour of a few interesting points on the island. Before arriving we got a close view of the tiny Island of Loreto, a private property north of Monte Isola where there’s a beautiful neo gothic castle nestled among trees. Our guide told us that George Clooney has his eyes on it, but so far hasn’t been able to buy it.

Our next stop was the little village of Carzano, where the unusual Festa di Santa Croce takes place. This tradition originated in 1836, at a time when a pretty nasty cholera epidemic was causing great damage to the local population. Fearing the worst, people asked for protection from the lethal malady to the Santissima Croce and promised to honor her with a magnificent celebration every five years.

After the sudden end of the epidemic, the festival has been held every five years since then; with the only exception of the year 1945 due to the Second World War, when it had to be delayed till the following year. During the days of the Festa, all the streets of the villages of Carzano and Novale are decorated with thousands of beautiful hand-made flowers dangling from arches with pine branches.

Each little flower is hand-made by the local inhabitants, for many years their technique has been passed on from within each family for generations. In the early days of the tradition, most of the flowers were roses which became the symbol of the Festa; today, the production is more diverse and locals compete to create more beautiful and realistic flowers each time.

Some of the flowers look so real that it is not unusual to see visitors getting close to smell their fragrance or bees being attracted to them in their search for nectar. Also, as a rule they only make flowers that replicate real flowers in an effort to male them more realistic and perfect each time. The production of the flowers starts more than a year in advance to the Festa di Santa Croce and it is covered in a lot of secrecy due to the competition to create the most beautiful and realistic flower.

All stories by : Bianca Bauza
9 Comments