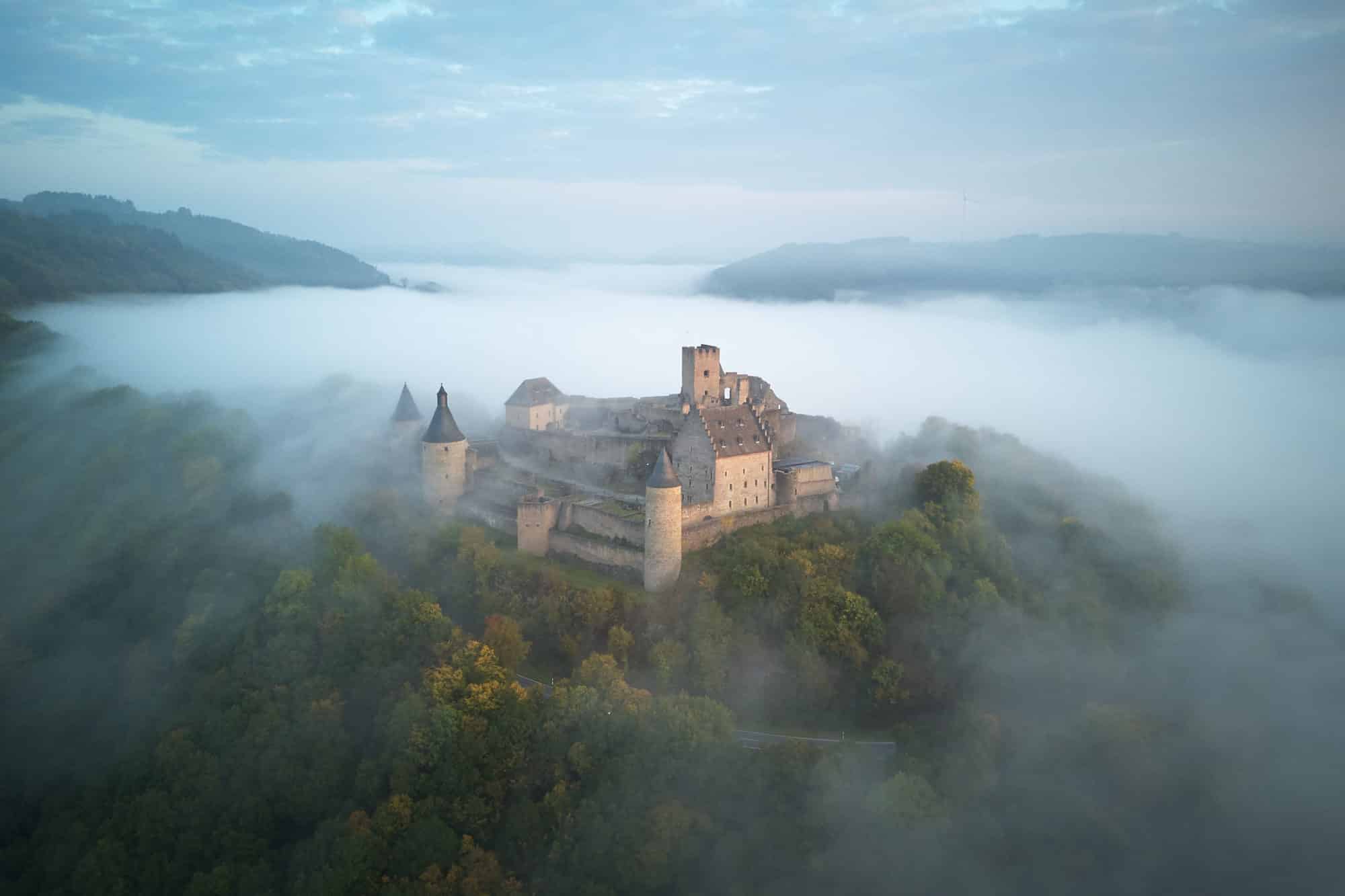 Is Luxembourg Worth Visiting? 7 Reasons Why You Should!

If you are wondering if Luxembourg is worth visiting, I list seven reasons why you shouldn’t miss traveling to this off-the-beaten-path destination.

You might not have heard much about Luxembourg, but this tiny land-locked country is packed with treasures to discover. Squeezed between Belgium, France, and Germany, the country is the world’s last remaining Grand Duchy. And that is not the only thing that makes Luxembourg a unique destination, there are plenty more.

So, you are wondering… Is Luxembourg worth visiting? I’d say, yes! And I’m going to give you seven great reasons why. But first, here are some interesting things you should know about Luxembourg.

Is Luxembourg Worth Visiting?

If you visit Luxembourg, you’ll find traces of its great historical heritage all over the place. After all, the country’s history can be traced back to Roman times. For centuries, this area has had a key strategic role in Europe’s history. As such, Luxembourg gradually built one of the best fortification systems in Europe, which earned it the nickname of Gibraltar of the North.

With its quaint old quarters and impressive fortifications, Luxembourg City was listed by UNESCO as a World Heritage Site in 1994. In fact, the most popular attraction in the city is the Bock casemates, a series of underground defense tunnels with fortified gun emplacements, whose foundation was laid out more than 1,000 years ago.

Even today, this tiny country still plays a key role in Europe. Luxembourg City is one of the three capital cities of the European Union, as well as an important financial center. As such, the city is also home to some impressive modern architectural masterpieces. For example, the acclaimed Philharmonie Luxembourg, designed by French architect Christian de Portzamparc, is well-known for its striking design and impressive acoustics, which make it one of Europe’s most renowned concert halls.

This interesting mix makes Luxembourg a destination where you can see side by side centuries-old buildings and innovative modern architecture. A place of great contrasts, indeed.

Pro Tip: If you are visiting Luxembourg City, one of the best ways to explore its main highlights is to follow one of the walking itineraries that the city has set out to guide visitors.

Often referred to as the Green Heart of Europe, Luxembourg has an impressive network of trails that cover over 5,000 km! From the rocky cliffs in Mullerthal to the east and the mountains in the Oesling district in the Ardennes to the north, Luxembourg has a lot to offer to outdoor lovers.

By far, the most popular route is the Mullerthal trail, which covers 112 km and consists of three big loops that take you along several cultural and natural attractions. So get ready for some splendid views over the river Sûre, walking through beautiful woodlands dotted with rare sandstone rock formations and enchanting castles.

Besides the many loop trails that you can find all over the country, you can also choose to do one of the station-to-station hikes in which you get to explore the countryside between train stations via well-marked trails. And then you just catch the train to get back to where you started.

READ THIS POST
Luxembourg: Enjoying the Views Along the Wenzel Walk

One of the best things to do in Luxembourg is visiting its great variety of museums. Covering topics from history to nature, from mining to wine and beer, from classic art to contemporary art; you are sure to find something interesting to see.

For example, in Luxembourg City, you can find the most important museums located along the MuseumSmile (the museums are located in a mile-long stretch that resembles a smile). And those include the Luxembourg City History Museum, where you can learn about the history of the city from its foundation to the present; the National Museum of History and Art, with its impressive collection of Celtic and Roman art; and, my personal favorite, the MUDAM (Museum of Modern Art).

This last one is housed in an amazing building designed by the Chinese American architect Ieoh Ming Pei, who also designed the Louvre Pyramid. The building was constructed on top of a fortress, creating an interesting contrast. Inside, the museum was entirely created by artists for the enjoyment of the general public.

Pro Tip: if you are visiting Luxembourg, you should definitely buy the Luxembourg Card, which gives you free access to over 50 museums and attractions.

Luxembourg cuisine has a strong French influence with some German and Belgian touches as well. But you can also find many restaurants featuring all kinds of cultures and mixes of flavors. After all, Luxembourg is a very cosmopolitan place. Moreover, there are 10 Michelin-starred restaurants spread all over the country.

I particularly enjoyed the overall quality of the food. When I visited, every place I tried seemed to serve delicious fresh food, that was masterfully prepared and nicely presented. I didn’t have any meal that I didn’t enjoy. Some of my favorite places to eat in Luxembourg City include beet with its tasty vegan comfort food, Mamacita with its spicy Mexican food and superb cocktails, and Brasserie Mansfeld with its lovely tree-shaded terrace in the Grund area.

As for wine, the districts of the Moselle valley produce mostly white wine varieties that include Riesling, Pinot Gris, and Pinot blanc, among others. Here you can also go on a themed hike along a wine route to discover the region.

Perched high on top of hills overlooking charming little villages and featuring excellent views of the surrounding countryside; castles in Luxembourg are a fairy-tale affair. Some have been carefully restored to their former glory and give you a glimpse of what life was like in feudal times. Others lie in ruins, but are still interesting to visit, from a historical perspective.

Located in the north near the border with Germany, the Vianden Castle is one of the most well-known castles in Luxembourg. It was built in the Romanesque style, between the 11th and 14th centuries. Some Gothic trimmings were later added. After falling into disrepair, it was recently restored and brought back to life. The Castle of Vianden is one of the largest fortified castles west of the Rhine.

The pretty town of #Vianden is located in the #Ardennes in #Luxembourg. It is known for its beautiful centuries old castle, which sits high on a hill above town. #BestofLuxembourg

You can visit Luxembourg at any time and find something to enjoy in each season. But if you manage to time your trip to attend some of its special celebrations, it’s even better!

For example, each year on June 23rd the whole country holds a big party to honor the Grand Duke during the National Day. The festivities start on June 22nd with an amazing firework display in Luxembourg City with live music. That evening, it looks like the whole country flocks to the capital and everyone is outside enjoying the warm summer weather and the free concerts in every corner. It can get actually quite crowded, but it’s an interesting experience, nonetheless.

Other celebrations worth considering include:

Luxembourg has a great transport system so it is easy to get around. You only have to pay €2 for up to two hours of travel, which in such a small country covers almost all journeys. A day pass costs only from €4. And the government is actually planning to make all public transport free in order to tackle environmental pollution.

The road infrastructure is well-developed, which makes it easy to travel by car as well. Gas prices are lower than those in neighboring countries, so remember to tank up before crossing the border.

The airport is very modern as well and it is served by many European airlines that offer many frequent flight connections, including Ryanair, EasyJet, Air France, KLM, and Lufthansa.

Alternatively, you can also easily get to Luxembourg by train with direct trips from Paris, including a high-speed train connection, Brussels, Metz, and Trier.

So back to your question, is Luxembourg worth visiting? As you can see, this little country at the crossroads of Europe has a lot to offer in terms of diversity and quality of life. Its culture, landscapes, and spirit make Luxembourg an ideal weekend destination to enjoy its awesome multi-cultural flair.

All stories by : Bianca Bauza
8 Comments

Previous Post
12 Tips for Traveling to Cancun on a Budget
Next Post
Off the Beaten Path: The Most Unusual Things to Do in Hong Kong
Close