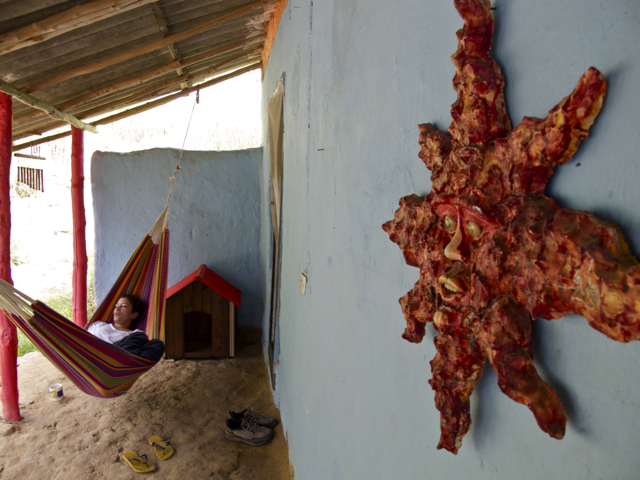 From Suesca, our next destination was a place called La Mesa de Los Santos; located some 50 KM from Bucaramanga, the capital of the Santander department. We were hoping to leave behind the rain and the gray mood of Suesca and get to do more climbing in Colombia. Also, we needed some sunshine in our lives and we were not disappointed. The weather here was much warmer and sunnier, plus there were fewer rainy days.

La Mesa de Los Santos is known for producing some of the best coffee in Colombia. For caffeine addicts, such as ourselves, it’s really worth a try. It became our favourite brand because of its nice and smooth taste. The reason that brought us there, however, was climbing at La Mojarra. There are more than 100 routes here, most of then between 15 to 30 meters long, carved in a beautiful reddish sandstone.

It was in La Mojarra where I first realised that what holds me back when I try a move is my mind rather than my body, as I previously thought. The first time that I tried Recórcholis, a fun 5.9 route with a couple of overhangs that are easy enough for beginners, I was surprised that I was able to get my ass over a roof. I was thrilled and wanted more!

There are a couple of hostels nearby the entrance to La Mojarra, most people stay up there. However, we stayed at Hostal Sol de La Mojarra which is located down at the bottom of the valley. This meant that everyday, we had to walk up the hill on the “camino real” to get to the climbing zone. This was a good bonus for us as we liked the warm up before getting to the climbing and because walking on these stones that were placed in by indigenous people so long ago is also kind of trippy.

The hostel is beautiful and modest. The owner Edgar has built the entire place with his own hands. He’s taken care of the smallest details and used whatever resources are locally available (remember, it’s a steep way if you have to carry a big load). One of my favourite spots at the hostel was the outdoor shower. It was surrounded by flowers of all colours and you could see the cliffs up above. It was impossible not to feel in paradise!

For eating, we brought a few special treats from the city and bought the basics in the store that is a few meters down the road from La Mojarra’s entrance. During weekends and holidays, they make some of the most delicious empanadas that we tried in Colombia. My favorite was the chicken and mushrooms combination. Nothing like a couple of empanadas and a beer after a day of climbing!

Finally, there are some hikes that can be done around the area as well, such as the one to visit the town of Jordan or the one that gets you to the waterfalls. Pictured above is El Salto del Duende.

All stories by : nomadbiba
4 Comments

15 Day Trips From Bogota That Are Worth the Journey
January 4, 2020

Previous Post
Chemainus – The Little Town That Did
Next Post
Hiking in Canada: Full Moon Mission to Wedgemount
Close