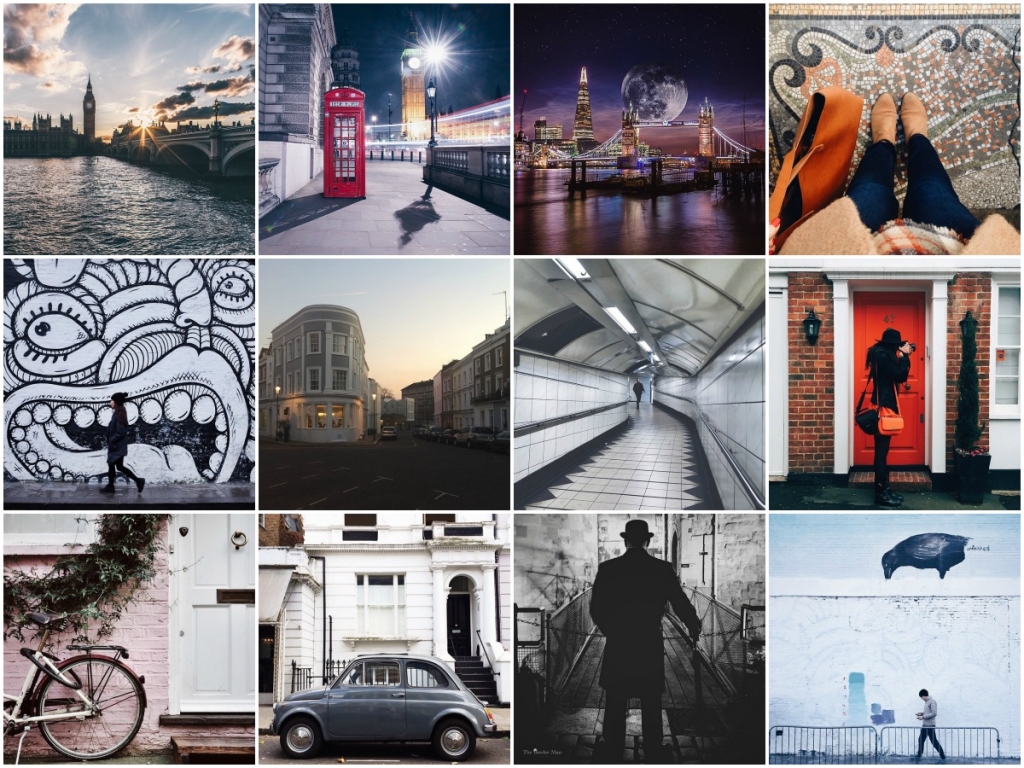 As my birthplace, London has a very special place in my heart, even if I have not spent too much time living there. Still, I love it every time when I get a chance to visit and it’s always nice to look at photos from this cosmopolitan city. For this round-up I’ve selected some of my favourite London Instagram accounts, which hopefully will inspire you to visit soon!

Urban photographer Emanuel Cole has become one of London’s rising Instagram stars — specially after he was named a suggested user in 2013. His photography is influenced by the area where he grew up, East London. You can catch more of his brilliant images on his Tumblr blog.

Ope Odueyungbo is an East London-based street photographer with a keen eye for symmetry. His images show the many faces of London, from dark back streets to fancy staircase shots; from the underground to the views high above the city. You should follow @greatarsenal for a taste of London’s urban vibe.

Landscape photographer Jacob Riglin is a young student who lives just outside of London. His Instagram gallery is full of dreamy images of London that border on the surreal. According to his website, he’ll soon embark on a four months trip. We will all be able to follow his adventures on his IG profile. Good luck! 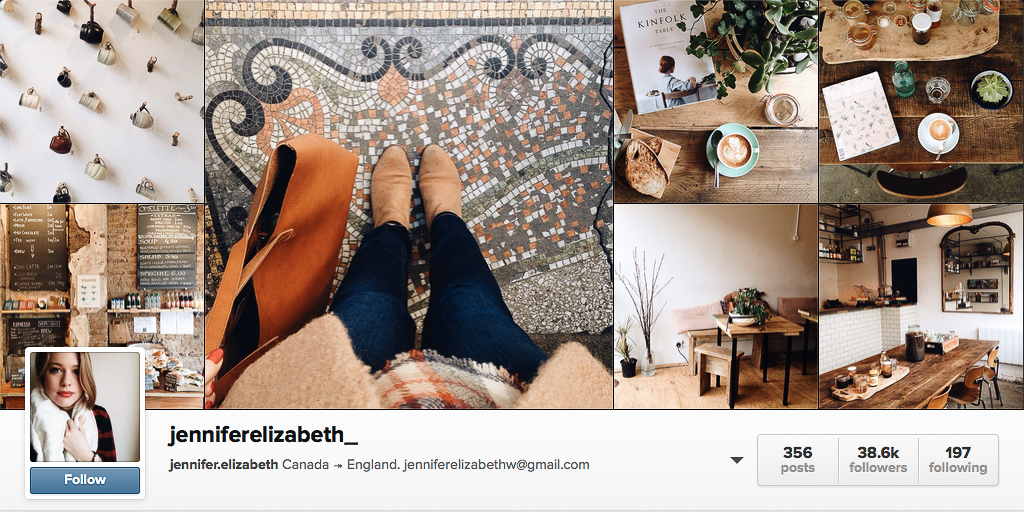 What first caught my eye from Jennifer’s gallery is the warmth that radiates from her images. I also love the sandy tones that she uses. It makes for a consistent look that is always nice to look at. Even though she doesn’t see herself as a photographer, she has a great eye for beauty.

Jonathan Crawley got his first real taste of photography on a trip to Costa Rica. He’s now a passionate Iger who shoots mostly with his iPhone. His images have a really nice composition and show London in a very unique way.

A woman who wears many hats, Kate Paillat is a writer, photographer, graphic designer, social media consultant and mother of two kids. Her gallery is full of pretty images that are subtly colourful. As a newbie mom, I particularly enjoy the photos of her children, they are very sweet.

Freelance creative director Mr Whisper has become one of London’s Instagram sensations. He specializes in street photography and his images are sleek and cool. In his early days on IG, he used to shoot portraits of people in the metro. And the underground still has a major role in his gallery.

When I first saw Ana’s gallery, I couldn’t believe that London could be such a colourful place. Looking at her images one can discover some of London’s hidden gems. Plus, there are lots of nice coffee shots, too! 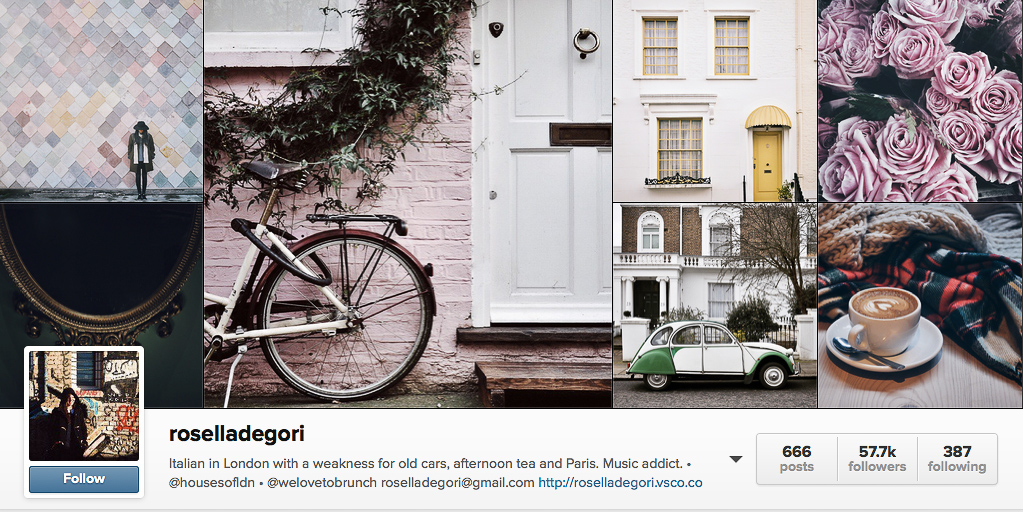 Rosella Degori is an Italian based in London who likes to show on her gallery some very poetic images of this megacity. I love the pastel tones of her photos. Along with other nice London Instagramers, she also participates in the account @housesofldn a joint project that features  the best shots of London’s prettiest houses. Also worth a look!

The gallery of Robin H brings followers to London’s most quiet and peaceful corners. He has a very consistent stream of nicely composed images. Also, he often features some lovely vintage cars in his photos.

What could be more classically London than a gentleman wearing a bowler hat while exploring the city? Sean Byrne, the man behind The Bowler Man, showcases some of London most iconic views by following the steps of this traditionally clad gent. 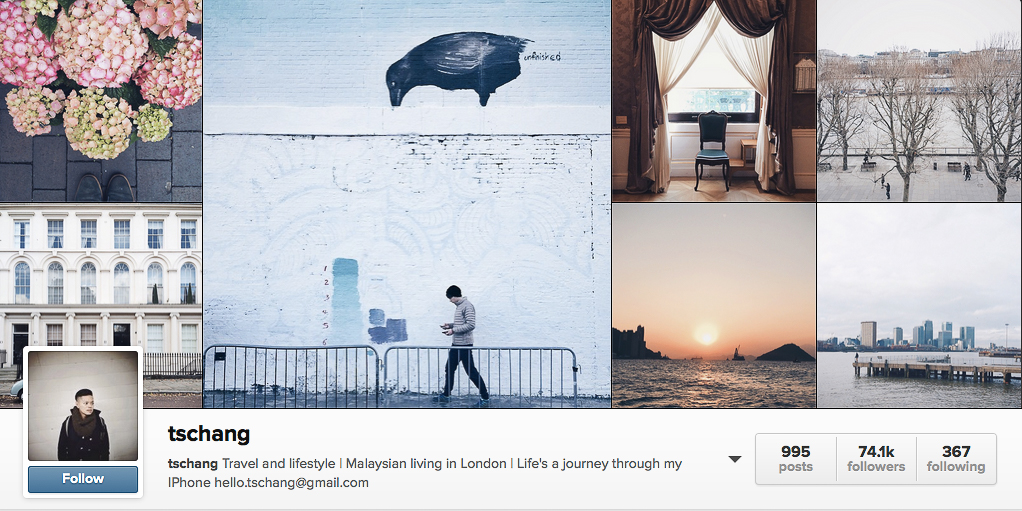 Tun Chang is a Malaysian living in London. His IG gallery is consistently beautiful. He’s a big fan of capturing spontaneous and unexpected moments of his daily life with his iPhone. To see London from his eyes, follow along!

Also, if you’re in London and would like to connect with other Instagram fans, check out these groups:

I hope that you’ve enjoyed this post. Also, check out my other posts on the Best of Instagram series:

For next time, I’m preparing a special round-up of Instagram accounts to follow for dog lovers. So stay tuned! In the meantime, have a look at my Instagram profile and check out my latest shots:

All stories by : Bianca Bauza
12 Comments