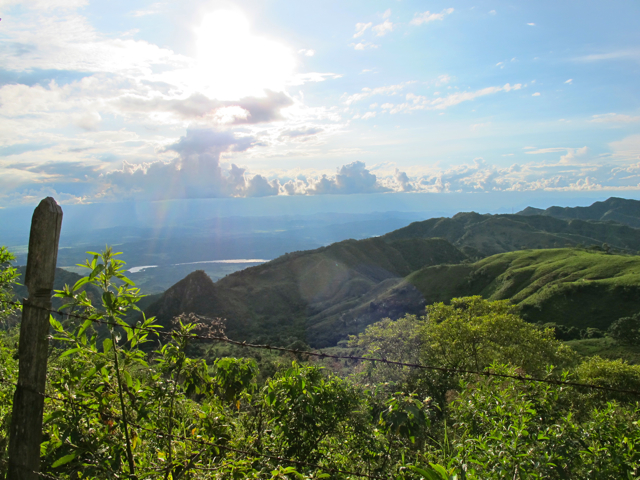 Loosing It On The Way Back To Bogotá

When we left El Peñol, it was a beautiful sunny morning with clear blue skies and not a cloud in sight. Before heading off on the road, we took this opportunity to get clear shots of the huge rock reflecting on the flat waters of the lake.

However, we were a bit pressed for time because we needed to get back to Bogota by nightfall. Alain’s friend, Mike, was arriving by plane the next morning and we wanted to pick him up at the airport. We felt lucky in this bright shiny day and pushed on. The journey was long and we were expecting to arrive in town at about 16.00. Our only worry was the state of the roads. We were hoping that there wouldn’t be any flooded or cut roads that would delay us.

Our plan was to get to Chiquinquirá from Puerto Berrio and from there on to Suesca. However, when we got to the road we were supposed to take, we had to ask around to see if we were on the right track. To our dismay, it turned out that the road that in Google maps looked like a decent sized highway was in reality no more than just a long dirt road. According to the people we asked, it would take us about 5 hours just to reach the town before Chiquinquirá. So we made a quick decision to turn back and drive south to Honda and keep riding to Bogota instead.

On the way, we had to stop at a gas station to fill up our tank and to get something to drink. It was a very hot afternoon, and this is where things started to get twisted. When Alain went to get his drink, he placed the camera bag on the counter and came to ask me if I wanted anything. He then stayed with the bike and I went to get my own drink, but I didn’t see his camera bag so I payed and went back to the bike.

Alain bought some oil for the bike, and we where going out of the station when he suddenly screamed: “My camera!!! Where’s my camera?!” We went back to the counter and asked around. We looked behind the counter but it was already gone; and no one knew anything about it. Inside the bag, there was his Nikon D300 with the fish-eye lense, memory cards, batteries, etc. All in all, it was about $4000 in photo equipment that was lost forever. He was so upset, we couldn’t believe this was happening.

On top of all this, the bike started to mess with us. It sounded as if it had a bad case of indigestion as it kept backfiring and making farting noises. The road back to Bogota was a very long ride. What should have been a pretty straightforward trip of no more than 8 hours, turned out to be the toughest ride in our trip, and probably the longest one. It took us nearly 13 hours to get to the capital. When we finally arrived in the evening, we were dead tired and still in shock by the loss of the camera bag.