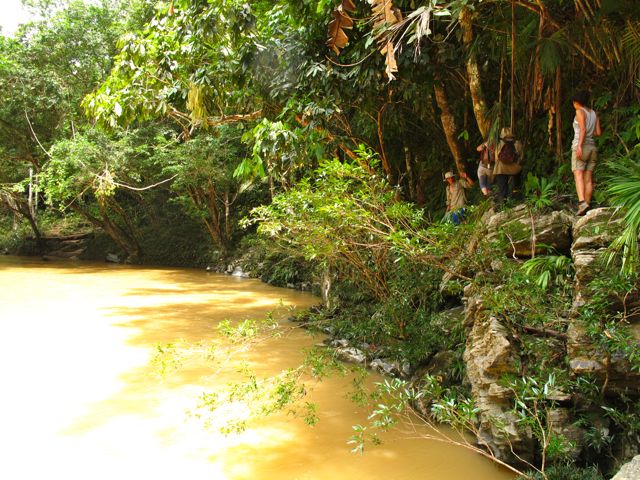 We left Yolombó at around 11 AM heading towards Maceo, about 30 KMs away. It was lunchtime when we arrived into town so we asked around for a good place to eat. The locals recommended eating at La Nena’s restaurant, where they serve tipical food that is delicious and cheap. After filling up our bellies, we continued our journey to the climbing area. We still had a couple more hours of bad dirt and mud roads until Hacienda Santa Barbara, which is only 30 KM away.

It was already 15:30 when we finally got there, but since we had not made any arrangements there were no guides available to take us to see the climbing area. After such a long drive, we were determined to see the place at least for a few minutes before having to turn around and do it all over again. So we asked everyone we met on our way for directions. We hiked through a really beautiful trail through lush and thick tropical vegetation. I was exsthatic! This is the type of experience I am looking for! We made it as far as we thought we could on the closest side of the river, and then decided to turn around to try avoid driving at night on the muddy road. On the way back, we were treated to an spectacular sunset on the emerald green hills.

It was already dark when we arrived back to Maceo The streets were bursting with noise and activity. There were lots of people outside. Sunday night seems to be The Night to be out in this place. Loud music was coming out of bar after bar after bar. The blasting rancheras, boleros and tangos trying to outdo each other in a race of heartache and despair.

After buying supplies for dinner, Adiela got a call from her family telling her that it has been raining heavily in Yolombó and that the road might be cut at some point(s). As we were forced to stay in Maceo, we decided to go back to the climbing area early in the morning to finish our mission.

We searched for somewhere to sleep as far away from the noisy streets as possible. We only found a little place run by a couple of grandparents and their cute little granddaughters. The rooms were super basic and tiny. The bathroom area was separated from the sleeping area only by a shower curtain. Behind it, the toilet, the sink and the shower were all aglutinated into a tiny space. Throughout the night we could hear the sounds of little mice feet running around the ceiling. I was worried that they might get in.

The next morning we were up and out before 8 AM. After a simple breakfast of arepa and cheese, we set out to the climbing area once again. This time, we were lucky that there were two great guides to show us the way, Camilo & Claudia high school students from the area. We would have never found the climbing area on our own. After we passed the point were we turned back the day before, we still had to walk for about an hour more.

When we finally got there, we found a full on camping site with everything to live comfortably, including wine bottles and a butano gas tank for cooking (how did they manage to get it all the way there is still beyond me). After a short break for taking photos and having some platanitos, we set on our way back. We were determined to not spend another night in Maceo. It was about midday and it was very hot and humid in the tropical jungle. We were all sweaty and sticky, so we were all for a stop to swim in the river. It was so cool and refreshing.

On the way back, this big and hairy beauty was crossing the road ahead of us.