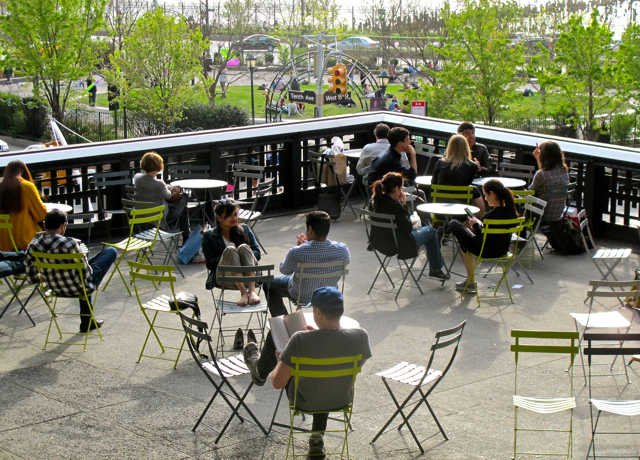 Perched high atop the busy streets of Manhattan’s West side, the High Line is a public park built on the reclaimed remnants of past freight train lines. Back in the day, accidents between trains and traffic were so common that 10th Avenue was known as Death Avenue (see photo below). In the 1930s, the High Line was built as a way to remove dangerous trains from the streets of this industrial district; making it a vital part of the manufacturing landscape.

Seeing those big rolling trains loaded with produce, meat and manufactured goods pass right through building blocks to deliver their loads must have been quite an impressive sight. However, as more and more trucks started to be used to transport goods, train traffic declined until the High Line was entirely abandoned by the 1980s.

As trains no longer roamed its tracks, wild vegetation started to sprout all over the old rail lines. Then, local property owners started lobbying for the High Line’s demolition, but a group of neighbours banded up together in 1999 and formed Friends of the High Line to fight for its preservation and transformation into a public space. By the end of 2002, New York City made it its policy to preserve and reuse the High Line as a public park.

After reconditioning the area, the first section of the High Line finally opened in June 2009; with a second section added just 2 years later. Currently, there are works in progress for a third and last section that would provide bigger communal spaces than those that already exists. At the moment, the High Line extends from Gansevoort Street in the Meatpacking district up until West 30th Street. Below, you can see an awesome map created by artist and graphic designer Paula Scher.

On any beautiful day, New Yorkers and visitors alike turn to the High Line for a respire from the city’s bustling noise and activity. It has become a great place to relax, read a book, have a picnic or simply take a peaceful walk. What I liked  most about the High Line was the ingenuity and creativity of the designers in planning a space that provides so much enjoyment in such a massive concrete jungle.

During the warmer months, there are plants and flowers among the train tracks. At the time of my visit, the spring cutback had just finished; a massive undertaking that takes more than 1500 working hours to complete! But plants are not the only living organisms that are well taken care of at the park. Birds also enjoy the perks that the High Line has to offer, such as special sculptures fitted with small containers with food and water!

They have really put a lot of thought in every detail of the High Line. There are several access points with elevators not just stairways, there are public restrooms and plenty of sitting space and tables, and there is even a deck from where you can watch New York’s busy traffic rush by. Also, some residents that live by the High Line have created their own creative art pieces to greet visitors passing, like this guy!

15 Instagram Accounts That Will Make You Fall in Love With New York
September 26, 2019