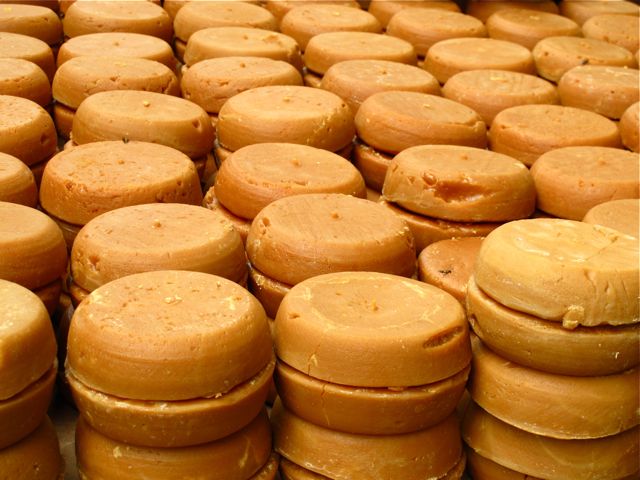 Panela – The Purest Sweetness From The Cane

Panela is a sweetener produced from sugar cane through a process of evaporation. Colombia is the second major producer of panela in the world, with most of the production being destined for local consumption. There are crops of sugar cane all over the country so the production of panela is very much spread out. Traditionally, it is considered as the sweetener of the campesino. It is widely consumed by the poorer people in the country. Wealthier consumers usually prefer white refined sugar, honey or synthetic sweeteners.

Around Yolombó, there are many trapiches where panela is produced. Many rely on manual labor and only use traditional methods of production. In these parts, panela production is sort of a community affair that is ruled by agreements that go a long way back in time. These agreements are meant to unite all parts in the production of panela and to work towards the same goals. For example, the people who actually own the land give some plots to campesinos to grow sugar cane for panela production. The campesinos own the crops on that land, but only as long as they grow sugar cane. They would not be allowed to grow anything else. It is not an easy system to maintain, but it has been in place for many years and people are used to working like that.

Also, the campesino that harvests the crops also works in their processing into panela. After all their hard labor in growing, harvesting and processing the sugar cane; they manage to get the equivalent of the minimum wage to sustain their families.

When the cane is ready to be harvested, it’s cut and loaded onto the mules. These animals are incredible workers. They can carry a load of about 3 times their body weight and walk the steep trails in the hills. The mules then bring the canes to the trapiche, the place where the processing is done. There, the loads are weighted and a record is kept; which helps to later distribute the earnings among the workers. After the mules finish their work day, they are washed and fed. However, as soon as they are clean they love to frolick in the mud, so they almost always look pretty dirty.

The process of turning sugar cane into panela starts with the cane being fed into the trapiche, a machine that crushes it and extracts as much juice as possible. The trapiche in Gualanday is new, when we were there it had barely been a week since they had installed it. They were quite happy with it. Apparently, it gets about 30% more juice than the old trapiche. Plus, it crushes the cane into smaller bits, which works better in the oven. What is left of the sugar cane is put aside and it then gets slowly fed into the oven that heats the pails where the filtration of the cane juice takes place.

The foam that comes out of the first filtration is used to feed the mules. At Trapiche Gualanday everything gets reutilized in panela manufacturing. There are simply no residues. After, the cane juice is passed from one hot pail on to another until it gets to a point where is pure and is ready to go into the molds. After it’s poured into the molds, it’s left there for a few minutes until it’s hard enough. Finally, it’s packed and ready to bring to the store. Panela has its own distinctive taste, a bit more subtle than sugar. Also, panela has a higher nutritional value than sugar since it’s rich in calcium and potasium; while most nutrients in white sugar are stripped away in the efforts to refine it.