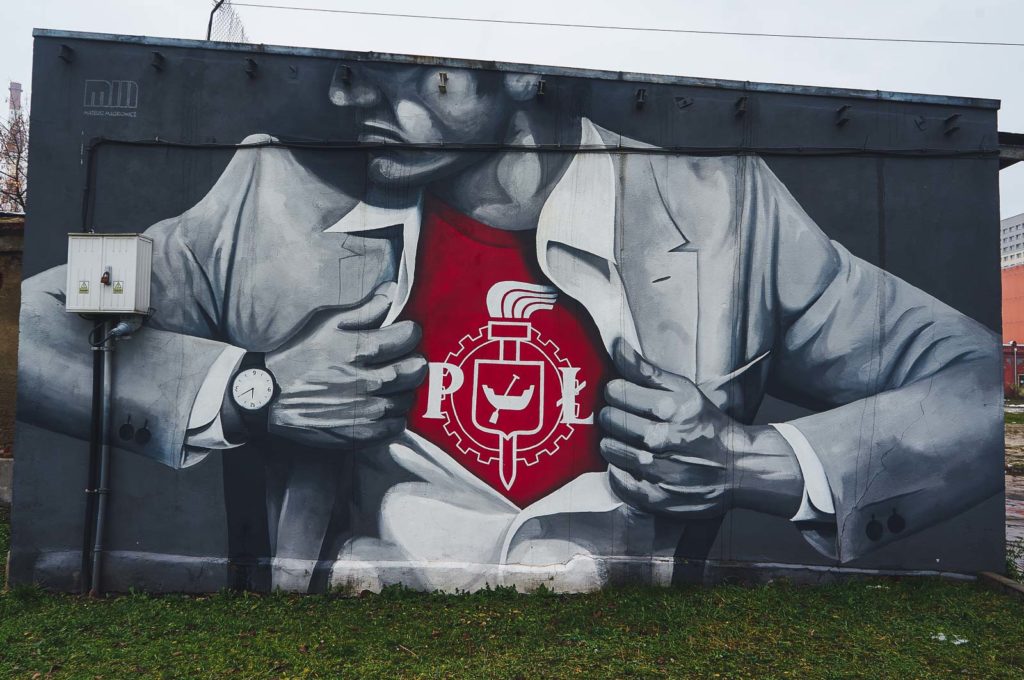 Lonely Planet selected Poland’s third-largest city as one of the best value destinations for 2019. Plus, there is also some fantastic street art in Lodz.

Last fall, I found myself looking at different alternatives for an urban solo weekend getaway. I wanted to travel somewhere new, ideally a budget-friendly destination with great street art. Some of the best flight deals I found were to Warsaw. And when I started looking for information about street art in Poland, images of some of the most iconic murals in Lodz kept popping up.

With the creation of the Urban Forms Gallery project in 2009, the city of Lodz has managed to grow an impressive collection of large-scale murals by some of the most recognized international street artists. If you are into street art, you’ve probably seen photos of some of the walls featured in this post at some point.

So, after carefully pondering the pros and cons, I finally decided to book a flight to Warsaw and add a couple of extra hours by bus to my journey and spend my weekend in Lodz, instead of the Polish capital.

After arriving at my hotel on Friday evening, I went to grab a quick bite to eat and decided to go to bed early. I only had two full days to explore the city, and from my research, I could see that there was a lot to cover in just 48 hours.

The next morning, I was super happy because I could see this massive mural below right from my hotel room‘s window. This work is titled Bang! and it’s a collaboration between Polish duo Etam Cru and SatOne, a Venezuelan artist based in Munich. And that was only the beginning.

During my time in Lodz, I came across several more works from the guys behind the Etam Cru duo. The old lady holding the chicken was one of my overall favorite pieces. Then there was this other large-scale mural (picture above) in the Off Piotrkowska complex, which is a collaboration with another emerging Polish artist Robert Proch (a.k.a. Tone).

Plus, I was really stoked to see the one below, titled Primavera by Sainer, one of the members of Etam Cru. That one is probably one of the most iconic murals in Lodz.

Looking for street art in Lodz gave me the chance to see for the first time works by some of Poland’s most renowned street artists:

Besides all those fantastic murals by well-known local Polish artists, the impressive collection in Lodz also features plenty of works by some very famous international urban artists. For example, I was ecstatic when I saw this massive bird by Portuguese artist Bordalo II, who builds large-scale animal forms using waste materials.

Ever since I first saw some photos of his works, I’ve wanted to see one in person. So I was stoked to find this one in Lodz. I stayed about 15 minutes in front of it, trying to figure out what it’s made of.

Another big first for me was seeing this mural above by Eduardo Kobra — one of the most well-known street artists from Brazil. It is a fun and colorful portrait of Arthur Rubinstein, a classical pianist who was born in Lodz and is considered one of the greatest in the 20th century. Luckily, this was not the last time I saw one of Kobra’s murals. I also saw a beautiful massive one in Sandefjord (Norway).

I was also happy to see several works by some old-time favorite street artists. For example, I really liked the collaboration between Brazilian duo Os Gemeos and Spanish artist Aryz, whose work I had already seen in Hasselt (Belgium). Actually, there were a few murals by Aryz. My favorite is the one titled Love Letter, which you can see further down.

Another pleasant surprise was finding works by ROA and Vhils. The first is an artist from Belgium who mostly paints monochromatic murals of animals. I’ve been lucky to see some of his works in Belgium, London, and Chile. And the second is a Portuguese artist who is well-known for his particular technique of doing portraits by drilling on the walls rather than painting. His art pieces are often mesmerizing. I first saw his works during one of my trips to Berlin.

One thing that I was not expecting is how big Lodz is. I thought it was much smaller and that going around searching for street art would be less tiring. But during those two days, I walked a lot, and I still didn’t manage to see everything. And the fact that the days were shorter didn’t help, by 4 pm there wasn’t enough light to take good photos.

When I realized I was not going to be able to see everything, I decided to cut some corners, so to speak, and concentrate on the areas with the most murals. So I chose not to see those that were located further from the city center. It was a tough decision because there was one mural in particular that I truly wanted to see. It’s an enormous artwork by Chilean artist INTI, whose work I first saw in his native Valparaiso. I was bummed about that. Luckily, there was another mural by INTI in Lodz (below, left), and that was enough consolation for me.

Besides that, I was happy to see works by a couple more artists I recognized. There was an awesome mural by Brazilian artist Nunca, whose work I’d only seen once in Modena, Italy. And, another one of my favorite walls, was this massive deer by Chinese artist DALeast. Since I first saw one of his works in Heerlen in the Netherlands, I became a fan of his animal paintings.

Finally, another place I enjoyed visiting was the Pasaż Róży, a spectacular installation by Polish artist Joanna Rajkowska. For this project, she covered in mirror shards the entire façade of the buildings in this courtyard, creating a mesmerizing visual effect. If you go to Lodz, you really should pass by. It’s a unique place, and photos don’t make it justice.

Also, further in, on that same courtyard, there is a piece of lace art by Polish artist NeSpoon. I’d only seen photos of her works online, so I was thrilled to bump into this by chance.

In the end, I can say that I am impressed by the quality of street art in Lodz. So far, they have managed to curate a splendid collection featuring some amazing artists. So I think it’s exciting to see how it keeps evolving.

I’d love to visit again, perhaps in summer or fall when the weather is nicer, and see those murals I didn’t have time to check out and the newest additions.

Here is a map pinpointing most of the street art I saw in Lodz. Also, I used this map from Street Art Cities as a guide, so you might find that useful as well.

And if you are going to Lodz and need a place to stay, I highly recommend the B&B Hotel Lodz Centrum. It is centrally located, just a block away from Piotrkowska, the building is modern and brand new, and the room rates are quite good. So make sure to check them out.

Disclaimer: this post contains affiliate links. When you make a purchase through one of these links, we earn a small commission at no extra cost to you. This helps us keep this site running. Thank you for your support!