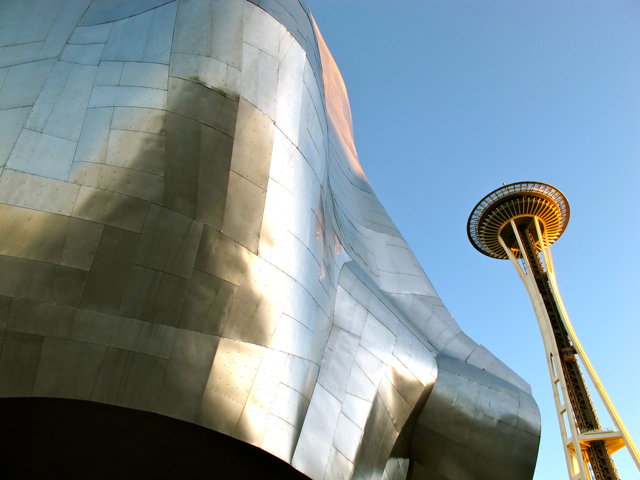 During our time in British Columbia, we had the chance to cross the border to the United States and pay a couple of quick visits to Seattle. People say it rains there all the time, but we lucked out on both occasions and got beautiful blue skies over the city.

We took a stroll in Pike Place Market, one of the oldest farmers’ markets in the United States. We stopped to watch the guys working at the Pike Place Fish Market, where they spend their days throwing fishes at each other while the crowd watches in fascination.

Back when I used to work in an office I remember seeing a video about these guys and how they create a fun workplace.

One late summer afternoon, we took advantage of the gorgeous golden light and went to check out the Space Needle. It stands at 184 metres high and it’s the most iconic of Seattle’s landmarks. According to Wikipedia, “with paint colors named Orbital Olive for the body, Astronaut White for the legs, Re-entry Red for the saucer, and Galaxy Gold for the roof, the Space Needle was finished in less than one year. It was completed in April 1962 at a cost of $4.5 million. Renovations were completed in 2000 that cost nearly five times the original price ($21 million). ”

Right next to the Space Needle is the Experience Music Project & Science Fiction Museum. The building was designed by Canadian architect Frank Gehry. Unfortunately, it was past their opening hours, so we could only admire the building from the outside.

As many of his other buildings, the EMP features a similar sheet metal construction to the Guggenheim Museum in Bilbao, Spain. However, this building has not gathered the same praise and has faced some criticism. No matter what others might say, Gehry’s work presents a feast for any photographer. It is easy to spend some time snapping away at this amorphoeus and colourful structure.