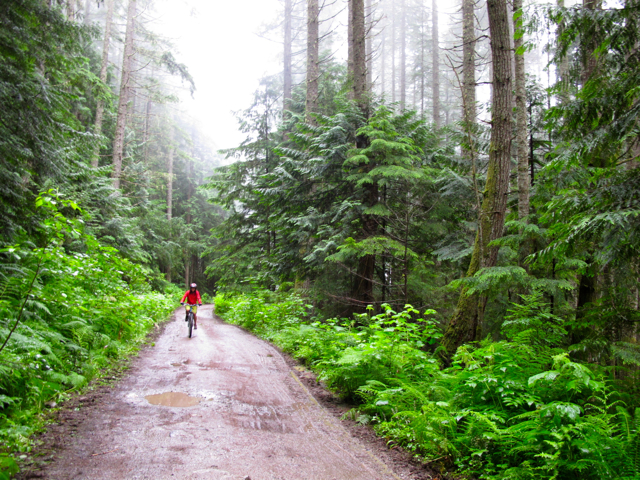 Whenever I ride a bicycle, I still get the same sensation of freedom as I did during the early rides of my childhood around our neighbourhood, back when things were really much simpler. When I was living in Barcelona, I’d ride my bike no matter the weather or the distance in the urban jungle. I’d revel in cruising the city and flowing through traffic and seas of pedestrians. Even if my bike was rusty and a bit beat-up, it was very reliable and it was one of my dearest possessions.

But it wasn’t until I got to Squamish, the outdoor capital of Canada, that I finally went mountain biking. With over 600 trails for all experience levels, mountain biking in Squamish is a very popular activity despite being one of the wettest locations in Canada. One wet afternoon in mid-July, I jumped at the chance of going for a bike ride, even if I had no real idea of what mountain biking was about. Alain handed me a pair of oversized, bright yellow shorts, a helmet and some protectors for my arms and shins. I wondered why I’d need all that gear.

For my first trail ride ever, I was lucky that my friends picked the awesome Half Nelson, the hottest trail in Squamish now. Half Nelson is a remarkable piece of work on so many levels. To start, sustainability was the core principle in the design of this trail. Its course was adapted to the water flow of the mountain, making it easier to maintain despite the usual Squamish rains. Secondly, it is the first mountain bike trail to be funded by the government, making it freely accessible to anyone and setting an example for other communities.

Additionally, Half Nelson was specifically designed to please riders of all experience levels, and it makes for an exhilarating ride. The trail is a 3 Km downhill pump track, with many berms and jumps. It is fast and smooth and there is almost no need to pedal at all. The jumps are all well spaced, and the careful design of the trail is obvious even for an inexperienced rider like me.

To get to Half Nelson, we would usually take a shuttle from the Highlands to the parking lot at the base of the trail. From there, it takes about 35 minutes of uphill riding to get to the entrance. It’s not easy, and it for sure will get you pumped; but it’s well worth it. Once at the top, it’s nice to catch a breath and have a safety meeting while getting ready for the ride downhill. That first time I rode down into the forest I had no clue of what to expect. I was surprised on some turns and jumps; but once I got into the flow of the trail, I couldn’t stop smiling.

Contrary to anyone’s expectations I made it down the trail without crashing nor harming myself. I was psyched! During our stay in Squamish, we rode down Half Nelson many times. In fact, our favourite sequence was doing two laps down Half Nelson, followed by one lap down Pseudo-tsuga, another cool trail which is named after the Douglas-fir. Other trails that we rode in Squamish are Roller-coaster, Power House Plunge, Jack’s Trail, Lumberjack, and Rob’s Corner, among others.

Sometimes, riding with the boys was hard and I had to walk big chunks of the trail, as my self-preservation instinct would take over. One time, I forgot to bring the shin pads and I paid dearly for it. One of the pedals incrusted itself in my right shin. I have a scar now and have never forgotten the shin pads again.

Downhill mountain biking can be scary because you can really hurt yourself. On one of our rides down Half Nelson, we met a group of four young University students. One of them had just crashed into a tree about 200 meters from the start of the trail. He was bruised and bloodied, disoriented, and seemed to have lost a couple of teeth.

When you are constantly on the road and traveling on a budget, you have to relay in people’s generosity to get the gear you need for certain activities. Most of the riding I did in Squamish was on an old but reliable Coiler bike that we borrowed from Alain’s friends. But one day, Tom gave us the chance to ride part of Half Nelson on his Nomad. The different was amazing, the stability of the Nomad made me realised how clunky the other bike was, in comparison.

Mountain biking in Squamish can also be very mellow and relaxing as it takes you riding into beautiful forests. When riding fast and smoothly under the trees, I get a totally different feeling of freedom than the one riding through the concrete jungle. Now, I love biking more than ever.