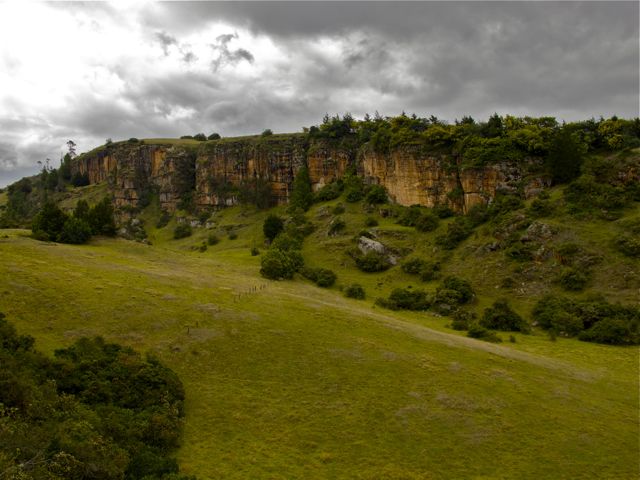 During our time in Colombia, we made Suesca our base and ended up spending almost 2 months in this climbing destination, just 60 km away from Bogota. Back in March, when we first got there, the weather was quite nice. It was often warm and sunny. But by the time we left in June, the weather had turned 180º and the grey days moved in along with constant rain and floods.

The way to the Rocas de Suesca is just before getting into the town’s center. You just need to follow the train tracks, that’ll take you right to the foot of the cliffs. When it rains constantly, there are landslides that cut the tracks for weeks on end. Also, the river can grow enough to almost reach the tracks and flood the access to some of the routes. In fact, when we got back from our visit to Trapiche Gualanday in Yolombó, we found out that the bridge that used to connect the Rocas to Valle de Halcones had been swept away by the river.

Valle de Halcones is a nearby climbing zone that perks up on some of the surrounding hills. It’s just a 40 minutes walk from the town and the Rocas. However, with the bridge gone it was no longer possible to cut directly through to get to the Rocas. Now we had to walk first to town, and then walk to the Rocas. It’d take over an hour.

Also, the motorbike kept having mechanical problems. After trying out a few things, the mechanic in Suesca finally realized that all troubles were caused by some faulty wiring work done in Venezuela.

Despite the rain, there are some routes in Valle de Halcones that remain kind of dry when it’s wet everywhere else. Normally, there are fewer people climbing here than in the Rocas below and the views are more beautiful. But beware, this rock is within private property and someone might ask you to leave. We were kindly kicked out once by some young guys working for the patrón. They explained that climbing was no longer allowed since someone had an accident and decided it was right to sue the land owner.

Like lots of places, Suesca is a town that buzzes with activity during the weekend, when the city folk from escape their concrete jungle to enjoy some time in nature. During the weekdays most restaurants remain closed and there are only locals and a few climbing bums around.

My favorite after climbing hang-out in Suesca is definitely La Casita del Argentino, a rustic and basic restaurant that serves delicious food at good prices. I just wanted to keep going back for the empanadas! For more information about climbing in Suesca, visit the Club de Escalada de Suesca (in Spanish).

Apart from climbing anytime we got a break from the rain, we spent our days hiking around to get used to the altitude. I also tried to keep active by jogging, but it was not easy. The terrain is pretty uneven. There are plenty of hills that kept my heart rate high while going up, and my mind focused on not hurting my knees while going down. Plus, when I finally found a nice road for running, I got attacked several times by some damn dog; until I ended up giving up.

The rest of our days, we were just hanging out around the house: reading, writing, editing photos, cooking, drinking nice hot Colombian chocolate to keep us warm and trying to figure out the next steps for our journeys.