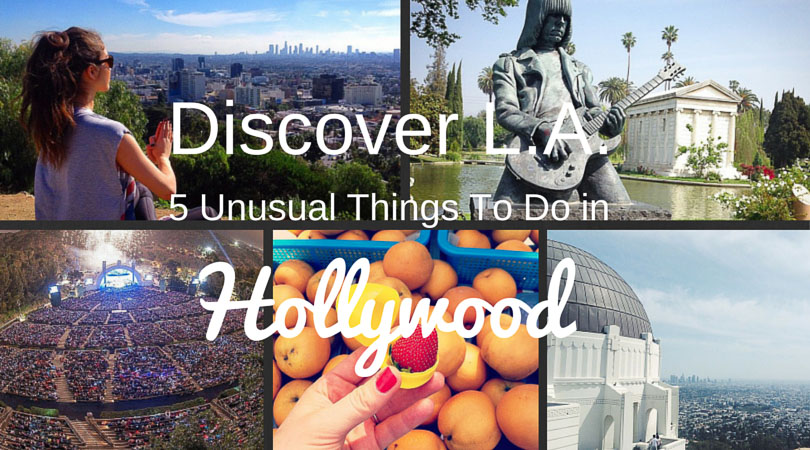 Discover Los Angeles: 5 Unique Things to Do in Hollywood

With an estimated population of about 4 million people, Los Angeles is one of the biggest cities in the United States. The city covers a vast area, and its surrounded by mountains, patches of forest, beautiful beaches and the nearby desert. One of the most famous districts of the City of Angels is Hollywood, the entertainment capital of the world. Most travelers visiting this mythic place stick to the usual landmarks: the Walk of Fame, the Chinese Theater, and the iconic Hollywood sign. But if you want to get off the beaten path, check out these 5 things to do in Hollywood to get a fresher perspective.

Hear the Music at the Hollywood Bowl

Home to the Los Angeles Philharmonic Orchestra, the Hollywood Bowl is one of the most famous amphitheatres in the United States. Many well-known artists have played in this venue: from opera sensation Andrea Bocelli and the legendary Beatles to avant-garde artist Bjork. Attending one of these performances is an unforgettable experience. To see who’s playing next, check on its website.

For travelers who like to get outdoors, a hike in Runyon Canyon Park is a must. Located just two blocks from Hollywood Boulevard, the park offers a rare opportunity to escape the hustle and bustle of the city. There are several trails with a diverse grade of difficulty. Once you reach the top, you will be rewarded with a panoramic view of the Los Angeles basin. Also, don’t forget to keep your eyes open for a celebrity spotting.

Taste the Local Flavors at the Hollywood Farmers Market

This outdoor street market brings together local farmers, food vendors and even street performers. Every Sunday morning, locals flock to this foodie haven to do their weekly shopping. The Hollywood Farmers Market is a great outing for the whole family.

Look at the Stars from the Griffith Observatory

Sitting on the slopes of Mount Hollywood, the Griffith Observatory not only offers impressive panoramic views of Los Angeles, but is also one of the best places to see stars in the city. The ones on the sky, that is. The building itself has appeared on a few movies. Additionally, there are astronomy-related exhibits on site.

As the final resting place of several famous people, the Hollywood Forever Cemetery has become a very popular attraction. Some of its most renowned residents include Rudolph Valentino, Johnny and Dee Dee Ramone, Jayne Mansfield and Mel Blanc. But it is not only to pay their respects that people like to visit this peculiar cemetery. In the summer time, there are also outdoor movie screenings as well as concerts and events.

With its rich movie industry history, Hollywood’s charms are sure to dazzle visitors. After seeing the most popular landmarks, make sure to venture off the beaten path to see Hollywood’s more unusual side. Finally, if you are looking for affordable places to stay in LA, check out Hipmunk’s guide to hotels in Los Angeles.

This article is part of the #HipmunkCityLove series.

Off the Beaten Path: 8 Unusual Things To Do in & Around Cancun