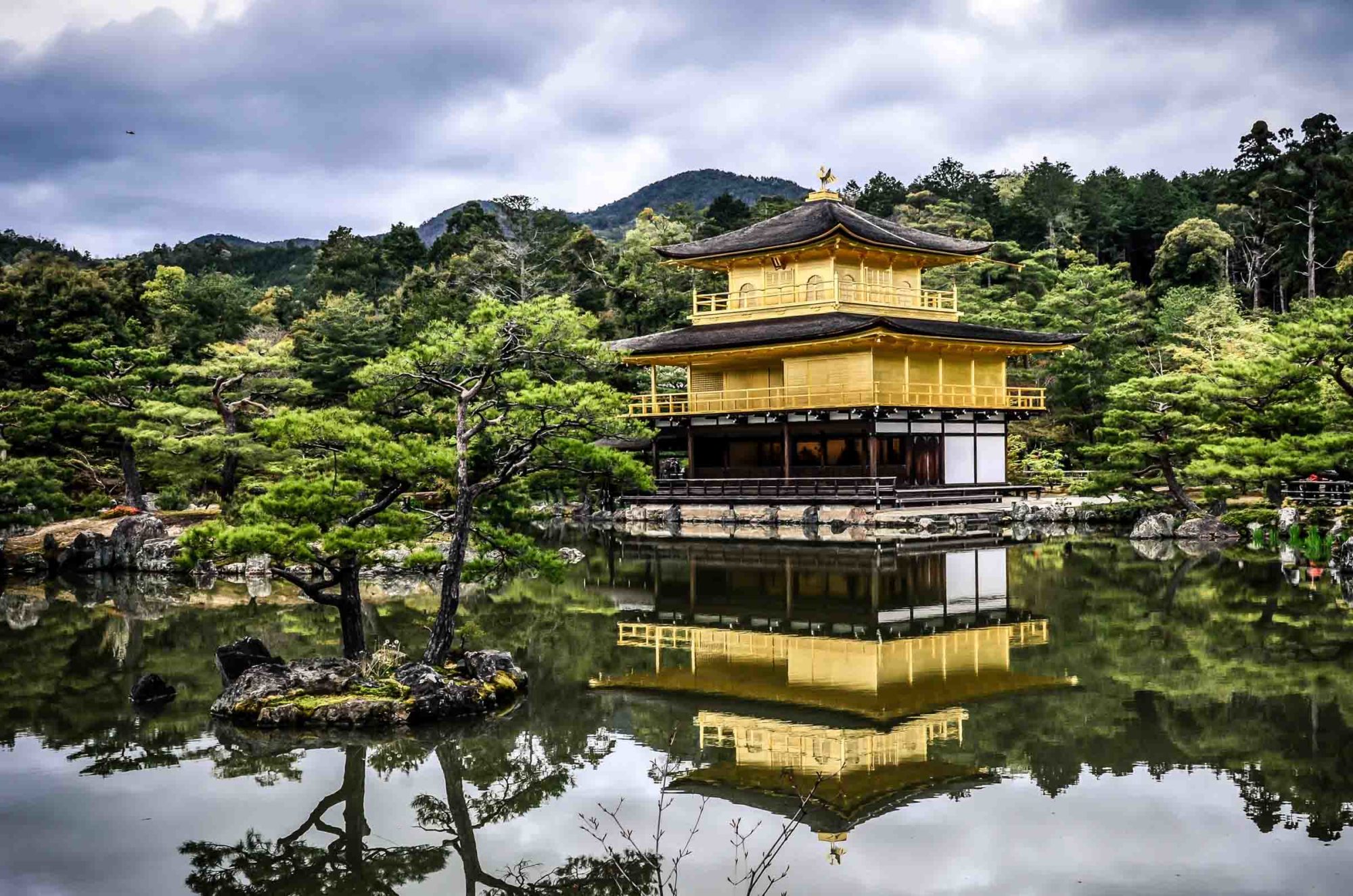 The 10 Best Temples in Kyoto That You Shouldn’t Miss

This fascinating city is one of the best places to experience ancient Japanese culture and you shouldn’t miss visiting these amazing temples in Kyoto.

Kyoto, the former imperial capital of Japan, is one of the best places to experience ancient Japanese culture. There are over 1600 shrines and temples in Kyoto and each serves its own special purpose. Also, UNESCO has declared several of these temples as World Heritage Sites, so there is no shortage of interesting sights in this city.

One thing is clear, though. Even if you moved there, you probably wouldn’t have time to see them all. And choosing which ones to visit can be an overwhelming task. But do not fret. If you are visiting this rich historical city, these are the best temples in Kyoto that you shouldn’t miss.

The Best Temples in Kyoto

1. Kinkaku-ji (Temple of the Golden Pavillion)

Known as the Golden Pavillion, this 14th-century three-story building was a shogun’s retirement villa and is now one of the most famous temples in Kyoto. Clad in gold leaf, the temple shines under the bright sunlight while its reflection dances on the pond below. The site is beautiful no matter the season, so it’s no wonder it has been cataloged as a UNESCO World Heritage Site.

This iconic temple has served as inspiration for other important works of Japanese architecture, most notably the Ginkaku-ji temple — also known Silver Pavilion (see below). In 1950, most of the building was consumed by a fire started by a young monk who was apparently trying to commit suicide. The building that you can see today is a reconstruction of the original.

Since this is one of the most important temples in Kyoto, it is always busy; so you are going to have to brave the crowds. Still, if you arrive first thing in the morning, it should be a bit better; but try to avoid going on weekends. Also, note that visitors are not allowed inside.

2. Ryoan-ji (Temple of the Dragon at Peace)

Featuring one of the most beautiful zen gardens in Japan, Ryoan-ji is a UNESCO World Heritage Site. Built during the Muromachi period, in this soothing garden sand is used to represent the sea, while the waves are depicted by lines drawn using a rake. And the stones represent mountains and islands.

Even though its bare minimalist style might seem puzzling to some, it is said that if you can see all of the 15 large rocks in the garden at the same time, you will attain enlightenment.

To appreciate the garden’s tranquillity, it is best to arrive first thing in the morning, before the site gets crowded. Alternatively, if you get there just before closing time, you might also enjoy some solitude.

Surrounded by the lush vegetation of the Higashiyama forest and featuring many sub-temples, the large complex of Nanzen-Ji is an impressive site that dates back to the 13th-century. With its distinctive San-Mon gate and aqueduct, this is another very popular temple in Kyoto. However, since it covers such a large area, it doesn’t feel as crowded as other temples.

Located just outside of Kyoto’s city center, Nanzen-ji is one of the most important Zen temples in Japan and one of Kyoto’s largest temples. If you visit, do not miss looking for the secret grotto, which is set behind a waterfall that is hidden on the hill just behind the temple.

Since the complex is pretty big and there are several sub-temples and sites worth seeing as well, make sure to allow enough time for your visit.

Opening hours: every day from 8:40 am to 5 pm from March – November, and from 8:40 am to 4:30 pm from December – February.
Entrance fees: Admission to the grounds is free. Entrance to the San-Mon gate, Hojo, Nanzenin, Konchi-in Temple and Tenjuan Temple ranges from 300 JPY to 600 JPY.

Perched on a hill overlooking the city, Kiyomizu-dera is one of the most famous landmarks of Kyoto. Although it is a very touristic site and can get very crowded, it is still a place that shouldn’t be missed. The temple, named after the waterfall within the complex, offers spectacular views of the city.

Built in the Edo period, the main building is supported by more than 100 keyaki trees, without using a single nail. An impressive feat, indeed! In 1994, Kiyomizu-dera was listed by UNESCO as a World Heritage Site.

Note that the temple is currently undergoing some renovation work, which is expected to finish in March 2020. Still, it is possible to visit the site.

One of the most beautiful temples in Kyoto, the Tofuku-ji temple is a pleasure to visit most of the year. While other nearby temples are bursting with visitors, you will usually find a peaceful oasis here. Except during autumn. It turns out that this Zen temple is one of the best places in Kyoto to see the colourful maple leaves in full swing, so it gets especially crowded in November.

Tofuku-ji is one of the five great Zen temples in Kyoto. Here you will also find 25 sub-temples and a rock garden. And the area around the Tsutenkyo Bridge is one of the best places to view the autumn colors in this complex. Other impressive buildings in the grounds include the Sanmon gate, which dates back to the 14th-century and it’s the oldest in its kind, as well as the Hondo (main hall) and meditation hall.

Access to most of the sites within this complex is free; however, there is an entrance fee of 400 JPY for the Tsutenkyo Bridge, Kaisando Hall, and the Hojo and its garden.

Opening hours: every day from 9 am to 4 pm.
Entrance fee: mostly free and a 400 JPY entrance fee for some areas.

Set at the northern end of the Philosophers path, Ginkaku-ji — also known as the Silver Pavillion — features some magnificent halls and gardens. This beautiful temple was built as the retirement villa of the shogun Ashikaga Yoshimasa in 1482 and was modeled in the style of his grandfather’s villa, Kinkaku-ji (the Golden Pavilion, see above).

Back in the day, Ginkaku-ji was an important center of the Higashiyama Culture, which had a great impact on Japanese culture. Some of the arts developed during this period include the tea ceremony, poetry, garden design, and Ikebana (flower arrangement), among others.

Be aware that this temple can get incredibly crowded as it is one of the city’s most popular sites. So try to visit on a weekday, soon after it opens or just before closing time.

Listed as a UNESCO World Heritage Site, the Daigoji temple was founded in 874 by Shobo, who gave it the name Daigo (meaning ‘the ultimate essence of milk’). The temple is located in a large complex that features two levels, Shimo Daigo (lower) and Kami Daigo (upper).

The five-story pagoda was built in 951 and it is treasured as the oldest of its kind in Japan; plus, it is also the oldest existing building in Kyoto. Surprisingly, this interesting complex is not visited much outside of the cherry-blossom season in early April; which makes it an ideal destination for those wanting to get away from the crowds of other more popular temples in Kyoto.

The hike to Kami Daigo on the upper level takes about an hour, so it’s better to set aside a good half day to fully enjoy this site.

With its over 1200 stone sculptures of the Buddha’s disciples, Otagi Nenbutsu-ji is truly an enchanting place. The temple was originally founded by Empress Shōtoku in the mid-eighth century and has endured its share of calamities, from flooding to civil war and extensive typhoon damage.

Its signature “rakan” statues were added from 1981 – 1991 and were each carved by a different person, so they are all unique. By walking around the grounds, you can find one with a tennis racket, a couple of them sharing a cup of sake and even one with an old portable cassette player!

Located on the hills in the outskirts of Arashiyama, this charming temple is rarely visited; which makes it an ideal alternative to get you off the beaten path.

Because of its remote location, you won’t find big crowds here.

Featured on the back of the 10 yen coin, the Byodoin temple is famous for its unique architecture. Its most well-known section is the Phoenix Hall, the only original building remaining, which features two phoenix statues perched on its roof. The phoenix was revered by the Japanese as a protector of Buddha.

This building is one of the few remaining examples of Heian-period architecture that has survived the wars and fires that have plagued Kyoto. The temple overlooks a serene small pond, which is ideal for amazing reflection photos.

A visit to this lovely temple takes about an hour, but you can easily make it a nice half-day trip out of Kyoto City.

Set against a backdrop of lush green mountains, the Chion-In temple features the largest wooden gate in Japan. Once you pass the gate, you will find several halls dedicated to the priest Honen, founder of the Jodo sect, the largest school of Buddhism in Japan, and who died by fasting to death.

It is also the most popular pilgrimage temple in Kyoto, so it is usually bustling with activities. And do not miss the temple’s giant bell, the largest in Japan, which was cast in 1633 and weighs 70 tonnes.

Be aware that in some indoor areas photography is not allowed. The Main Hall is currently under restoration and is closed to the public. It is expected to reopen by 2020.

For more information about the temples in Kyoto, check out the city’s official guide. And if you are looking for a place to stay in Kyoto, consider splurging a little and book a room at the Hiiragiya Ryokan. This traditional ryokan rarely fails to impress guests by offering the most exquisite Japanese hospitality.

Map of Temples in Kyoto

Off the Beaten Path: The Most Unusual Things to Do in Hong Kong
March 22, 2019

Off the Beaten Path: The Most Unusual Things to Do in Hong Kong

The Best Hotel Pools in Bangkok For Any Budget
October 8, 2018

The Best Hotel Pools in Bangkok For Any Budget

Previous Post
Off the Beaten Path: 15 Unusual Things To Do in Paris
Next Post
38 of the Best Brunch Spots in NYC
Close