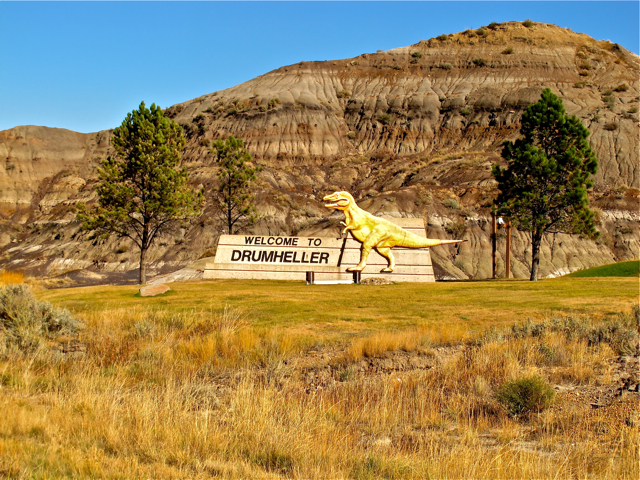 By the time we were ready to leave our sanctuary at Priddis, a little town near Calgary, the rain had finally stopped. We had a gorgeous sunny day to drive our way out of Alberta. But before making our way eastwards, we decided to make a detour to visit the Royal Tyrrell Museum in Drumheller. The museum houses Canada‘s largest collection of dinosaur fossils. The town is within the Red Deer River valley in Alberta’s badlands, a dry desert-like area where there is not much vegetation growing; but it is rich in well-preserved fossils.

The Royal Tyrrell Museum, located just 6 km from Drumheller, is a popular attraction with people of all ages and it’s one of the most visited museums in Canada. By chance, we visited the museum on a busy Saturday afternoon. The place was full with families. There were children running around the entire place. Among the many fossils in display, the most popular are the different remains of the Tyrannosaurus Rex.

But without doubt, the prettiest sight were the ammonites — extinct hard-shelled, squid-like marine creatures that under some conditions end up compressed into a colourful and iridescent material that can be used for making jewelry. This specimen measures 62 centimeters in diameter! It’s the most brilliant ammonite ever recovered in Alberta.

Another of the museum’s precious finds, is the largest Ceratopsian skull ever found. It took scientists years to piece it together. Even if only 70% of the skull was recovered, they were able to find that it belonged to a new genus older than the Triceratops. So they dubbed it the grandfather of the Triceratops.

Personally, I thought the most impressive fossil was the SuperCroc skull, a distant relative to modern crocodiles. Its massive size gives you an idea of just how huge the Sarcosuchus must have been. They say it was as big as a city bus! Unbelievable!